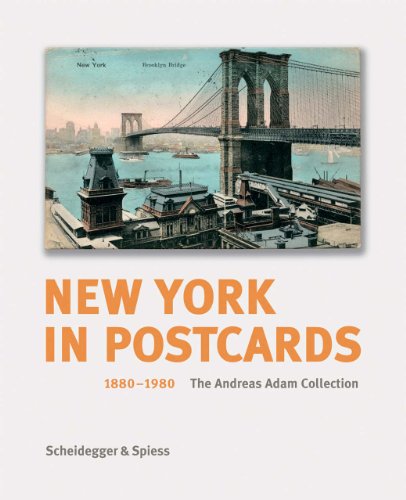 "New York in Postcards, 1880-1980 provides a dual prism for viewing the city. . . . The book serves as both an architectural history and a history of ways of seeing the city." --Sam Roberts "New York Times " "These postcards bring us back to a New York that possessed glamour and drama and warmth, in even measure: a city in which there was always light, and always possibility; a city that, when you came to visit, you could not wait until you were back home to tell everyone all about it, and so you always, always, sent a postcard."--Paul Goldberger, architecture critic for the New Yorker, from his essay --Paul Goldberger

The development of New York from colonial fur trading hub of New Amsterdam into one of the most vibrant and exciting cities on earth has been documented many times. Countless films, songs, photographs and books tell the story of this quintessential metropolis and global icon. But this lavish, beautiful volume offers a new perspective through Andreas Adam's vast collection of rare picture postcards that recount the city's changing identity and culture over a century. The 900 vintage cards in 'New York in Postcards 1880-1980', organised by subject and geographic area, bring to life the look and feel of their eras and vividly depict every aspect of New York City over a century: 19th-century street scenes, famous architectural landmarks, lush gardens, cars and trains, everyday life and historical events. The images themselves are a fascinating melange of artistic media, including archival photographs, drawings and paintings, and represent a wide range of styles from art nouveau to neo-objectivism, naturalism and pop art. This book is rounded-out with essays by Paul Goldberger, the 'New Yorker's' renowned architecture critic, and art historian Kent Lydecker on the visual narrative and the architectural history of New York and the cultural history of the picture postcard.