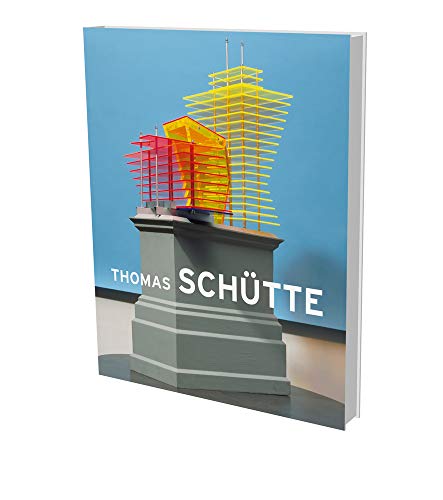 Since the early 1980s, Thomas Schütte—three times a participant in the documenta in Kassel, winner of the 2010 Düsseldorf Art Prize, and the Golden Lion as best individual artist at the 2005 Venice Biennale—has worked on architectural model, scenes, and figurative scenarios. Replete with notes on relative dimensions or accompanied by small figures, they correspond to the realisation on a larger scale, with many originally small models having been converted into large-scale works over time. The interplay between the small and the large, between the model and its realisation, and between the notions of art as a model and the models as art recurring themes throughout Thomas Schütte’s oeuvre. So he both instigated the publication of this voluminous book about the show in Bonn and laid down its specific detail. In this way, there is scarcely a single group of works missing from this chronological survey of the past thirty years, in terms of a model or an installation. The model itself is not just the nucleus of both a fantastical oeuvre, but takes on a more seismographic function, and it rediscovered the architectural arts on behalf of fine art.

Rainald Schumacher (b. 1953 in Duisburg) is art critic and curator, he lives in Cologne and New York. He studied art and philosophy in Vienna, was editor of »anonyme Kunstkritik« in Vienna, director of the Esther Schipper Galerie in Berlin, guest curator at the Dia Center for the Arts in New York. In 2010 he was in the curatorial team of Robert Fleck at the Bundeskunsthalle in Bonn. Thomas Schütte (b. 1964) studied art at the Kunstakademie Dusseldorf with Fritz Schwegler and Gerhard Richter. With the groundbreaking exhibition Von hier aus in Dusseldorf curated by Kasper König his international reputation had its starting point. He participated at documenta in Kassel 1987, 1992 and 1997; 1987 his sculpture Kirschensäule was shown at Skulptur.Projekte in Münster. Several solo exhibitions followed, amongst others 2004 and 2005 in New York, Madrid, Torino, Vienna, Basel and Chicago. 2007 at Henry Moore Institute Leeds, 2009 Haus der Kunst Munich, 2010 Museo Reina Sofia Madrid, 2013 Fondation Beyeler Basel, 2019 Monnaie de Paris.

Buchbeschreibung Hardcover. Zustand: New. Hardcover. Since the early 1980's, Thomas Sch Shipping may be from multiple locations in the US or from the UK, depending on stock availability. 256 pages. 2.140. Bestandsnummer des Verkäufers 9783940953544