Footsteps to Freedom: Four Spiritual Masters of Kriya Yoga and a Beginner 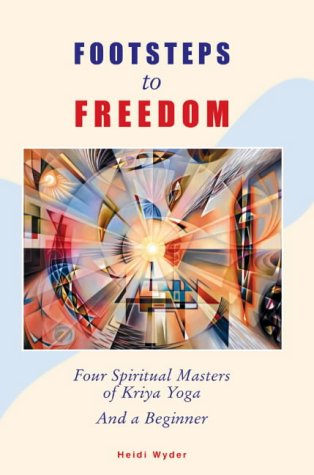 "Science without religion is lame; religion without science is blind." -Albert Einstein"

When Heidi Wyder sets off on her travels with a round-the-world ticket, India is planned as a stop-over. In Varanasi, she is persuaded by friends to take a few yoga lessons. She has no idea that she is about to meet a true spiritual master hiding behind the guise of a family man? The yoga teacher is Prakash Shankar Vyas, known to students and disciples as 'Guruji'. At first glance, he looks perfectly ordinary and seems to live a normal life. But Wyder's curiosity is aroused when she learns that Guruji is authorised to teach a scientific meditation technique known as Kriya Yoga.Wyder has heard that there are many branches of yoga, but Kriya promised to be the tree itself; its roots holding the answers to the fundamental issues of existence, whilst ultimately leading man back to his spiritual origin. The method could only be passed personally and in confidence from master to disciple. Three generations of spiritual masters grace the wall of the yoga studio. An awe-inspiring portrait of the renowned Lahiri Mahasaya, and two smaller photographs of his son. Tinkari Lahiri, and grandson, Satya Charan Lahiri. The young traveller learns that the latter was Guruji's teacher, and that each of the masters in the Lahiri lineage lived as ordinary householders in Varanasi, whilst possessing unimaginable powers as authorities of Kriya Yoga. Despite their control over nature, even over death itself, they would only exercise yogic power when necessity demanded it. They helped the needy and healed the sick and dying, but they never performed miracles for the sake of either fame or money. Instead, their interest lay in the development and progression of each individual disciple who was committed to practice. They initiated true seekers of every caste and creed, giving them the key to inner peace, wisdom and freedom. Wyder is taken aback that a genuine path could exist, whereby even a beginner might follow in the footsteps of the saints, masters and yogis. Due to some of their religious convictions, even a small knowledge of the lifestyle and miracles of these masters raises a multitude of issues. The original plan to travel the world loses its gloss. There is evidently far more to Guruji than meets the eye, and Wyder bombards him with questions during yoga lessons. She stumbles across some startling revelations, and finds logical and scientifically provable answers to the most fundamental spiritual questions about the existence of God and the deeper meaning of life Before Wyder is initiated, Guruji emphasises that Kriya Yoga is no path to be undertaken lightly. She has to learn that success in the field, as in any other, will be achieved through love, dedication, courage and extraordinary discipline. These are the footsteps which lead to freedom. There is no glamour and there are few sensational experiences. But even at the beginning, there is increased self-awareness, a peace as never experienced before, and an inner light. Gradually, she begins to understand Guruji's words to her when she first asked for initiation: "If I give you Kriya, I am giving you everything."

1. Footsteps to Freedom: Four Spiritual Masters of Kriya Yoga and a Beginner