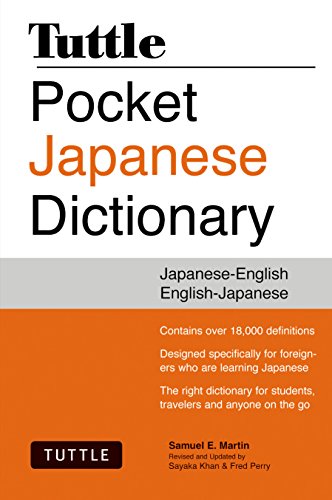 It's never a good idea to be overly-reliant on technology while traveling! Look up words quickly and easily with this great Japanese dictionary. Intended for use by tourists, students, and business people traveling to Japan, Pocket Japanese Dictionary is an essential tool for communicating with native speakers. With a handy pocket format and user-friendly, two-color layout, it features all the essential Japanese vocabulary appropriate for beginning to intermediate students. All entries are written in a Romanized form as well as Japanese script (Kanji and Kana) so that, in case of difficulties, the book can simply be shown to the person the user is trying to communicate with. This dictionary includes the following key features: Over 18,000 words and expressions in the Japanese language. Japanese-English and English-Japanese sections. Fully updated with recent vocabulary and commonly used Japanese slang. Clear, user-friendly layout with headwords in blue. Romanized script and Japanese script (hiragana and katakana) and characters (kanji) for every entry. Other books from this bestselling series you might enjoy include: Pocket Korean Dictionary, Pocket Vietnamese Dictionary, Pocket Mandarin Chinese Dictionary, and Pocket Cantonese Dictionary.

Samuel E. Martin is one of the leading authorities on Japanese and Korean language and the author of numerous books including A Reference Grammar of Japanese, A Reference Grammar of Korean, Essential Japanese, Basic Japanese Conversation Dictionary, and Easy Japanese. Fred Perry has a BA (History) from Yale University as well as an MBA from St. Sophia University, Tokyo (1984). He arrived in Japan in 1956 and continues to live there today. He has worked as a market researcher and consultant. Traveling throughout Japan as part of his job has provided the opportunity to learn about local dialects spoken in different parts of the country.