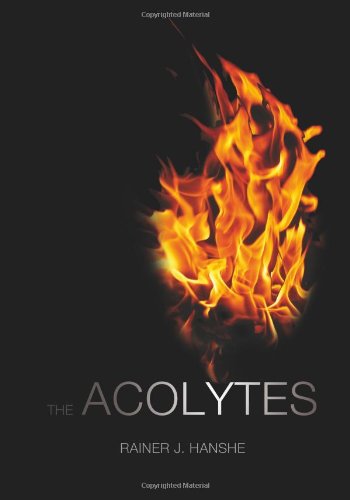 The Acolytes depicts the yearning of the young artist for success, acceptance, fulfillment. In this dark, searing tale of hope becoming obsession, admiration festering into entrapment, excitement bending into curse, Gabriel starts as a naďve young man full of dedication to high art and to the transformative powers of the imagination. In Amos, the renegade of American letters and cult figure, Gabriel thinks he has found his guiding star, but Ivan, the charismatic yet sinister theater director exerts a strange, mesmeric power over the author and his entire coterie. Terence, the unobtrusive moral fulcrum of the novel, and a cast of others are unable to escape from the welter of exploitation to which their lack of self-knowledge condemns them. Replete with horrors that rise to the grandeur of myth, The Acolytes is a novel like no other. -- "The Acolytes is an original and powerful visionary novel which introduces and explores territory-heroic idealism, its illusions and discontents-rarely touched on in American fiction. It addresses deep longings and aspirations that most artists have swept to the side, which is not only courageous, it could prove beneficial to our culture. Hanshe gives promise of becoming a truly important writer." -Daniel Blue -- The Acolytes "flies in the face of mainstream publishing with its eye on something bigger and vaster than the conventional marketplace. In mode its allegorical approach is so different than the types of Jonathan Franzen 'family sagas' that publishers pick up on nowadays. It's quirky, weird, and mannered and many of the scenes have the strange power of dreams. They proceed according to their own logic, stately as yachts, moving irrevocably, like Time. Like John Cowper Powys, Hanshe has the talent for making other species come to life." -Kevin Killian -- "The connection between the aesthetic and the religious realm in the term "acolyte" is important for Rainer J. Hanshe's novel as it subtly links his story of masters and disciples in the thespian and literary arts to the contemporary crisis in the Church. In the acolyte's realm the cults of art and religion converge. Hanshe's novel also illuminates, in beautiful and also horrifying ways, the many-nuanced nature of "love." In a deeply poetic subplot it shows the oneness of two beings in and with each other as an evocation of cosmic unity. The novel is a riveting, slightly surreal portrait of the bohemian underworld of New York and it exposes the sinister underside of the ever-beckoning dream of art. It shows with fascinating nuance the multi-faceted nature of artistic ambition, illuminating a range from lofty yearning to diabolical craving for power." -Walter H. Sokel

Buchbeschreibung Eyecorner Press 2010-12-12, 2010. Paperback. Zustand: Very Good. Item is in very good condition. If supplemental codes/CDs for textbooks are required please contact us prior to purchasing as they may be missing. Photos are stock pictures and not of the actual item. Bestandsnummer des Verkäufers DS-8792633064-2

Buchbeschreibung EyeCorner Press, 2010. Zustand: Like New. Used - Like New. Book is new and unread but may have minor shelf wear. Your purchase helps support Sri Lankan Children's Charity 'The Rainbow Centre'. Our donations to The Rainbow Centre have helped provide an education and a safe haven to hundreds of children who live in appalling conditions. Bestandsnummer des Verkäufers Z1-R-026-01613