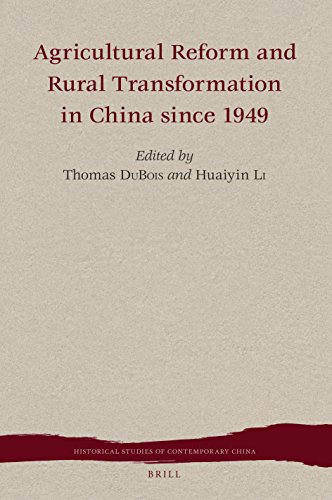 "Since its founding, the government of the People's Republic of China has strived to transform rural production, the theme of this volume of History of Contemporary China. Fourteen articles translated from the Chinese journal Contemporary History (Dangdai Zhongguo shi yanjiu) offer both empirical account and theoretical analysis of a broad range of historical events and issues, such as the guiding policy framework of the 'three rural issues,' the causes and consequences of the deep plowing movement and the development of public canteens during the Great Leap Forward, child care, enterprises and collectives, and private lending in the post-Mao era, and the changing dynamics of interregional flows of goods and people throughout the second half of the 20th century. These studies shed light on the historical origins of some of the agricultural and rural problems in China today"--Provided by publisher.

Thomas David DuBois studied Chinese history at the University of California, Los Angeles, and is currently Senior Research Fellow at the Australian National University. His publications include Empire and the Meaning of Religion in Manchuria, 1900-1945 (Cambridge University Press 2016), Religion and the Making of Modern East Asia (Cambridge University Press 2011), and Sacred Village: Social Change and Religious Life in Rural North China (University of Hawai’i Press 2005). DuBois is chief editor of the Brill “Historical Studies of Contemporary China” series.

Huaiyin Li received his M.A. from the Graduate School of the Chinese Academy of Social Sciences in 1987 and Ph.D. from UCLA in 2000. He is a professor of history and Asian studies and director of the Center for East Asian Studies at the University of Texas at Austin. His books include Village Governance in North China, 1875–1936 (Stanford, 2005), Village China under Socialism and Reform: A Microhistory, 1948–2008 (Stanford, 2009), and Reinventing Modern China: Imagination and Authenticity in Chinese Historical Writing (Hawai’i, 2013).