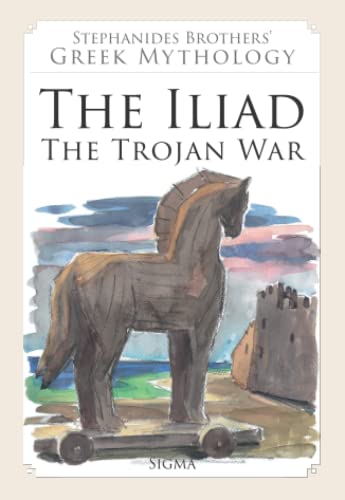 All that mythology tells us of the history of Troy, from its founding until its final destruction in the famous war. Why the quarrel started, the sacrifice of Iphigenia, the nine years of fighting, the last days of Troy, the Trojan horse. A special chapter is devoted to the Iliad, the fifty days of war described by Homer which takes the anger of Achilles as its theme. This great epic poem is presented in an extended summary, with some of its finest passages given in full. For the poetry of Homer's language often rises to heights of incomparable beauty, as in the parting of Hector from Andromache, or the scene at the end of the 'Iliad' in which Priam asks Achilles for the body of his son.

Menelaos Stephanides (1923-2007), the author of 'Greek Mythology series', originally studied economics in Athens but his main preoccupation was writing. For more than twenty-five years he concentrated, with great success, on the retelling of ancient Greek myths, tirelessly studying the source materials to achieve his literary version of the many stories. Working with his brother, the artist and illustrator Yannis Stephanides, he wrote and published the 18-volume series 'Greek Mythology' for children, which was translated into several languages and later reissued as a pocket book for older readers. He then turned his attention to more recent Greek tradition, studying hundreds of folk tales the most appealing of which he retold in the highly successful 10-volume series 'Folk Tales from Greece'. Menelaos Stephanides' name is now familiar in many parts of the world, thanks to the translation of both his mythology and the folk tales into several foreign languages. In 1989 his book 'Jason and the Argonauts' was awarded two Pier Paolo Vergerio honourable distinctions by the University of Padua, while in 1998 his entire published work was recommended by the Hellenic Ministry of Education for inclusion in school libraries, having already long been recognised as a source of reference for publishers, the reading public and educationalists.