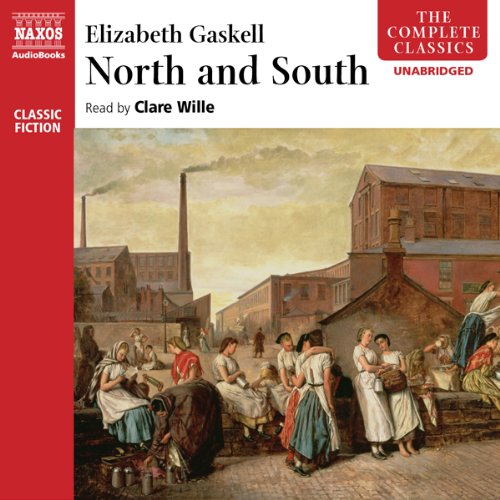 Elizabeth Gaskell's novels explore the social divisions of the 19th century with a vivacity that resonates in the Britain of today when they are widening again. Which isn't to say that they are worthy and consequently dull. No, Gaskell's books are rich with romance and peopled by characters the listener truly feels for. North and South takes Margaret Hale, daughter of a C of E vicar, from the drawing rooms of London and the exquisite beauty of the New Forest to the grim northern industrial town of Milton where, appalled by the conditions his workers live and work in, she finds herself in conflict with mill owner John Thornton. Excellent reading by Claire Wille. - Kati Nicholl,The Daily Express

To celebrate the 200th anniversary of Elizabeth Gaskell's birth, we embark on a series of unabridged and abridged recordings of her major novels. "North and South" follows our widely-praised recording of "Cranford" (2008), transporting the listener to the heart of Victorian England by vividly delineating the social landscape and an unlikely romance which flourishes within it. Saddened to be leaving behind the sophistication of the South, Margaret Hale approaches her new life in the unrefined, industrialised North with dread. Appalled at the poverty, struggle, and mean conditions that surround her, her revulsion particularly centres on the factory owner John Thornton. Yet, when circumstances conspire to bring them together, Margaret begins to see past crude stereotypes. Conjuring up a fantastic sense of time and place, Gaskell's novel of romantic suspense and changing perceptions, is a sheer delight in the hands of Manchester-born reader, Clare Wille.

Buchbeschreibung Naxos Audiobooks 2010-02-01, 2010. Audio CD. Zustand: Good. Item is in good condition. Some moderate creases and wear. This item may not come with CDs or additional parts including access codes for textbooks. Might be an ex-library copy and contain writing/highlighting. Bestandsnummer des Verkðufers DS-9626341858-3