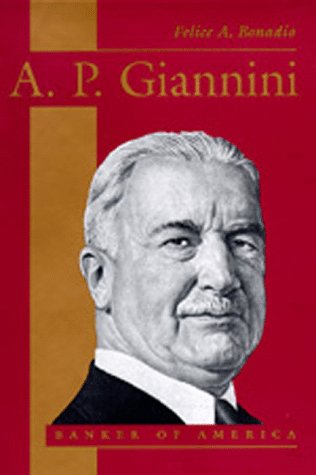 A. P. Giannini: Banker of America

Book by Bonadio Felice A

Perhaps more than any other individual, Amadeo Peter Giannini brought California into the twentieth century. Extending credit to ordinary working people, creating a financial empire through his branch banks, this son of Italian immigrants enabled California to advance faster than any other state in the decades before World War II. But who was A. P. Giannini? Felice A. Bonadio's superior biography reveals the founder of Bank of America in his many roles, most notably that of a bold, ruthless financial genius keenly aware of his minority status in a world dominated by the eastern Protestant elite. Yet this is more than the success story of an underdog. Bonadio profiles a man of immense talent who was relentlessly eager to serve 'the people'. Hard-driving, obsessive about defending his empire against its enemies, Giannini could be both a good hater and a good friend. He was one of the first American businessmen to promote employee ownership and profit sharing, and when he died in 1949 at age 79, nearly forty percent of B of A's shares were owned by its employees. Little interested in personal wealth, Giannini's own estate was modest at the time of his death. Much of Bonadio's research is from the private papers of Federal Reserve Bank officials and confidential Bank of America archives. Recollections of Giannini family members and former bank executives are also here, lending historical resonance and color to this portrait of a man whose influence endures many years after his death. Giannini prided himself on his compulsive work habits, which he justified with one of his frequently repeated aphorisms, 'Be first in everything'. Once, on horseback to solicit a consignment order from one of the valley's biggest growers, he suddenly spotted a competitor's team in the distance headed in the same direction. Remembering a deep slough that stood between him and the farm, he quickly cut across the field, tethered his horse to a tree, and swam to the other side. Then he ran the rest of the way to the farmhouse. By the time the other merchant had arrived, Giannini was negotiating a deal with the grower.