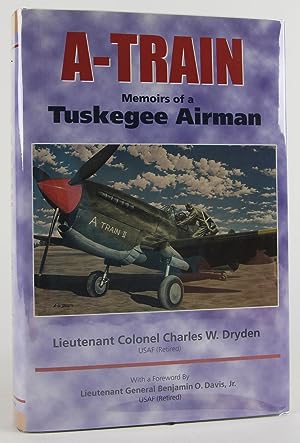 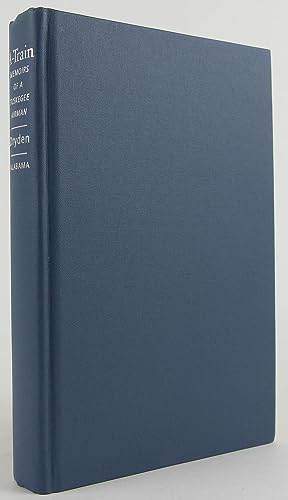 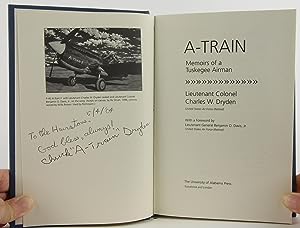 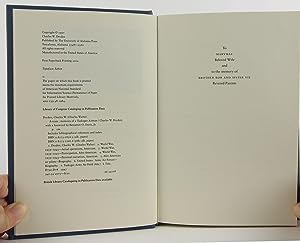 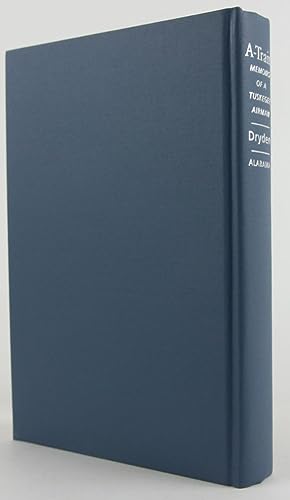 A-Train: Memoirs of a Tuskegee Airman

0817308563 1997 signed and inscribed copy, University of Alabama Press (Tuscaloosa, Alabama), 6 3/8 x 9 1/2 inches tall pale blue cloth hardbound in publisher's unclipped dust jacket, silver lettering to spine, illustrated with black-and-white photographs, xviii, 421 pp. Very slight rubbing to covers, with very slight bumping to lower tips. Very slight staining to blank front free-endpaper. Signed and inscribed by the author under his frontispiece portrait opposite the title page. Otherwise, a very good copy - clean, bright and unmarked - in a very good dust jacket which is nicely preserved and displayed in a clear archival Brodart sleeve. ~QQQ~ The story of one of the black Americans who, during World War II, graduated from Tuskegee Flying School and served as a pilot in the Army Air Corps' 99th Pursuit Squadron. Charles W. Dryden (1921-2008) presents a fast-paced, balanced, and personal account of what it was like to prepare for a career traditionally closed to African Americans, how he coped with the frustrations and dangers of combat, and how he, along with many fellow black pilots, navigators, bombardiers, and crewmen, emerged with a magnificent war record. Under the command of Colonel Benjamin O. Davis Jr., the Tuskegee airmen fought over North Africa, Sicily, and Europe, escorting American bomber crews who respected their 'no-losses' record. Some were shot down, many of them were killed or captured by the enemy, and several won medals of valor and honor. But the airmen still faced great barriers of racial prejudice in the armed forces and at home. As a member of that elite group of young pilots who fought for their country overseas while being denied civil liberties at home, Dryden presents an eloquent story that will touch each and every reader. Contents: Foreword; Prologue; Acknowledgments; Part I: Before Desegregation; Chapter 1. Dismissed! (July 1944); Chapter 2. Why? (July 1944); Chapter 3. The Fledgling (1920-1941); Chapter 4. Off to Tuskegee (August 1941); Chapter 5. Aviation Cadets (August 1941-April 1942); Chapter 6. Nest of Black Eagles (April 1942-April 1943); Chapter 7. Fighting 99th: Over There! (April 1943-September 1943); Chapter 8. Arrivederci, Sicily! (September 1943-1944); Chapter 9. 'You're Not Ready!' (1944-July 1945); Chapter 10. Fighting 99th: Over Here! (July 1945-February 1946). Chapter 11. Camelot! (February 1946-June 1949) Part II: After Desegregation; Chapter 12. Lonely Eagles (June 1949-July 1950); Chapter 13. Over There-Again! (July 1950-February 1953); Chapter 14. Sayonara! (February 1952-September 1957); Chapter 15. Guten Tag, West Germany (September 1957-May 1959); Chapter 16. Auf Wiedersehen! (May 1959-January 1962); Chapter 17. Twilight of a Lonely Eagle (January 1962-August 1962); 18. Contrails (Timeless); Epilogue; Glossary; Bibliography; Index. Buchnummer des Verkäufers QQQ-0871-7964

"Dryden is the archetype of both the first mainstream generation of black officers, and of the career reservists who were a mainstay of America's armed forces during the first years of the Cold War." --Multicultural Review "Through the eyes of an original Tuskegee airman, the reader catches glimpses of two wars, three continents, and twenty years of military service. . . . [An] honest portrayal that will enlighten young and old, civilian and military, historians and laymen." --Military History of the West