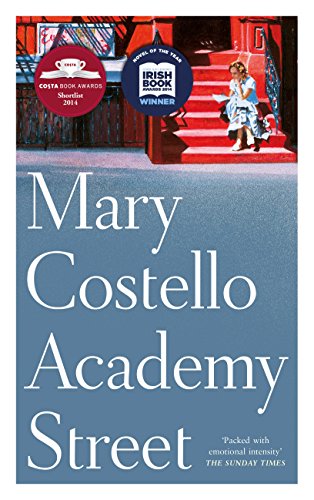 Signed by Mary Costello to the Title Page. Both Book and Dust Jacket are in Fine condition with a light push to the bottom of the spine. This unread book is guaranteed to be a 1st Edition, 1st Printing. Publishers number 1 confirms that this is a first printing. The Jacket has not been price clipped and is protected by archival protective covering. The book is professionally wrapped and packed with great care with bubble wrap and placed in a special book box to ensure that the book arrives at your destination in perfect condition. Buchnummer des Verkäufers 000718

Packed with emotional intensity * * Sunday Times * * A writer of huge ability . . . Brings to mind John Williams's resurrected masterpiece, Stoner * * Guardian * * To recount a life story in a novel is a difficult task. To do so with brevity and unsentimental honesty takes greatness. Academy Street is a powerful and emotional novel from one of literature's finest new voices -- JOHN BOYNE An exceptional first novel * * The Times * * With extraordinary devotion, Mary Costello brings to life a woman who would otherwise have faded into oblivion -- J.M. COETZEE Mary Costello's writing has the kind of urgency that the great problems demand - call them themes; they are the kind of problems that make a writer -- ANNE ENRIGHT * * Guardian * * Academy Street is understated, graceful and, ultimately, devastating. Even as my heart was breaking I couldn't put the book down -- DONAL RYAN, author of The Spinning Heart Intensely moving but never sentimental, Academy Street is a profound meditation on what Faulkner called 'the human heart in conflict with itself'. In Tess Lohan, Mary Costello has created one of the most fully realised characters in contemporary fiction. What a marvel of a book -- RON RASH Costello proves herself an absolute master in Academy Street * * Independent * * A novel where the interior life on an ordinary woman is delineated with artistry and grace * * Metro * * Delve[s] deep into the human condition, into the bittersweet beauty of life * * Irish Times * * In her deceptively easygoing debut novel, Costello has refined her already spare style so that scarcely a word or phrase feels extraneous * * Metro Herald * * An unimpeachable addition to the literature of Irish diaspora * * Country Life * * The work of a highly accomplished writer and heralds the emergence of an exciting new novelist . . . Academy Street will keep you glued to its crisp pages, such is the intensity of its language and scale of its emotional reach. This is a novel that should be read by anyone who cares about writing and its ability to invoke * * Irish Independent * * A markedly brave book, an unblinking attempt to recreate a life of intense ordinariness and make it special . . . well worth applauding * * Sunday Times * * Extraordinarily compelling * * Guardian * * Excellent * * Times Literary Supplement * * Immense maturity and unusual writerly empathy * * Scotsman * * A devastatingly sad, unsentimental and beautifully wrought account of a quiet life * * Psychologies * * Heart-breaking * * The Simple Things * * A major literary accomplishment from an exciting new voice * * Westmeath Independent * * Tess's fearful, reserved exterior and rich inner world is written with exacting discipline. Every emotion, every sensory image is pared back on the page, stripped right down to its very essence . . . Academy Street will keep you glued to its crisp pages, such is the intensity of its language and scale of its emotional reach * * Irish Independent * *

Brook Hill Books is a Bookseller that specialises in Modern First Editions, a high percentage of which are Signed by the Author. As Book Collectors ourselves, we understand the need for an accurate description of the condition of each book we have for sale. Following on from this we place great importance in the secure packing of each book we sell together with a fast and efficient service for all our customers.