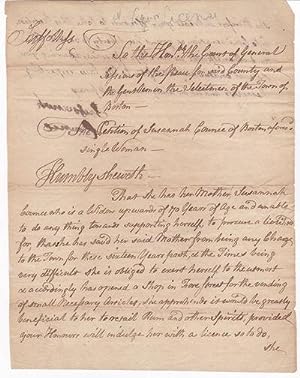 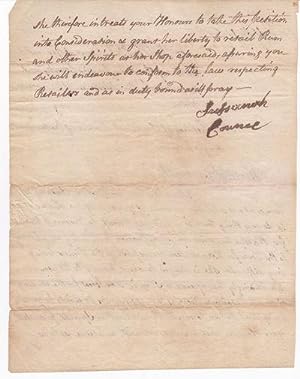 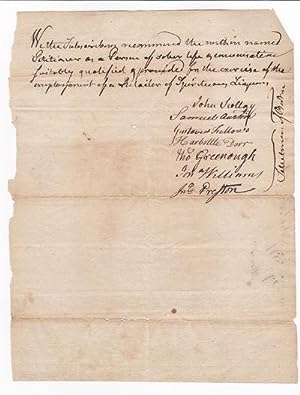 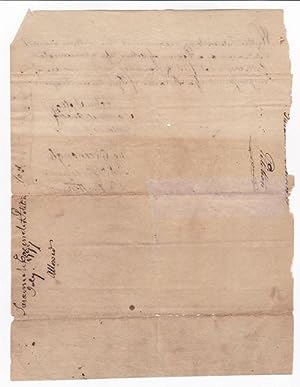 AUTOGRAPH DOCUMENT DATED JULY 1777: A PETITION SIGNED by the daughter of a widowed female proprietor of a shop on Fore Street in Boston, applying for a Liquor License. APPROVED AND SIGNED BY THE SELECTMEN.

- A 4-page autograph document penned in an unknown clerk's hand on two 9-1/2 inch high by 7-1/4 inch wide sheets of buff paper which were once likely attached. The document consists of a 180 word petition by Susannah Carme [?], penned on two sides of the first sheet, applying for a liquor license so that she may support herself and her seventy year old mother: "Times being very difficult she is obliged to exert herself to the utmost & accordingly has opened a shop in Fore Street for the vending of small necessary articles, she apprehends it would be greatly beneficial to her to retail Rum and other Spirits, provided your honours will indulge her with a licence [sic] so to do." Signed "Susannah Carme [?]". The document is further annotated on the third page, granting approval from the selectmen, and signed in ink by: John Scollay, Samuel Austin, Gustavus Fellows, Harbottle Dorr, Thomas Greenough, Jonathan Williams, and John. Preston. The document if additionally docketed on the verso. The petitioner's signature is quite smudged, whereas the other signatures are bold and clear. The document is folded several times with tears to the edges of the horizontal folds, two of which are partially repaired with clear archival tape from the verso. The corners are chipped & creased and there are additional minor tears to the edges. A wonderful revolutionary petition by a woman applying for a liquor license for her shop in Boston. Women in this period commonly ran liquor stores. Among the signers, John Scollay (1711-1790) was chairman of the Boston Selectmen from 1774 to 1790, and served in that position through the period of the American Revolution. One of the founding fathers of our country, he was a member of the Sons of Liberty and a friend of Samuel Adams. Born in Ipswich, Gustavus Fellows was a master and part owner of a ship by the age of 21. He moved to Boston in 1774 where he set up a distillery on Harvard Street. He was briefly driven from his business by "maniacal butchers" as testified by a 1775 letter from General Heath requesting that Captain Fellows be permitted to open a West India Shop in Roxbury. He built several frigates for the French Navy which earned him the friendship of General Lafayette and, in 1776, served as a Captain in the militia. A Boston selectman during the war, he was a member of the Committee of Correspondence, Insurance and Safety. In 1777, he was one of those who signed certification for James Otis who had been pressing for independence prior to the war. Though no proof exists, several have claimed that he was among those who participated in the Boston Tea Party, though he did refuse to carry British tea on his ship. He is said to have rescued the children of the French diplomat John de Crevecoeur during the war, taking care of them until their father could return to America. He was never fully repaid for his loan to the City of Boston to buy uniforms and supplies during the war. The Boston shopkeeper Harbottle Dorr, Jr. (1730-1794) was a member of the Sons of Liberty. He served as a Boston selectman for many years between 1777 and 1791. Documenting the events of the time, Dorr started buying newspapers in 1765 which he annotated in the margins thus leaving behind valuable eye witness source material from the point of view of a Boston citizen in the years leading up to the American Revolution. The Boston patriot Thomas Greenough (1710-1785) was a maker of navigational and surveying instruments. A member of the Ancient and Honorable Artillery Company, he was made captain of the 4th Company 2nd Massachusetts Regiment in the Cape Breton expedition. He became deacon of Boston's New Brick Church in 1755. He served as clerk of the markets, constable and as a Boston selectman. A member of the Revolutionary Committee of Correspondence, he was also active in the efforts to relieve the hardships of those who lost income during the Revolution. Bestandsnummer des Verkäufers 34560