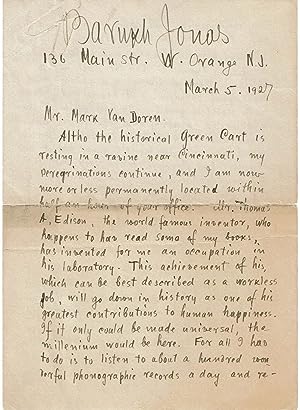 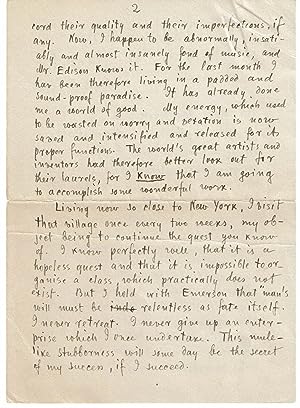 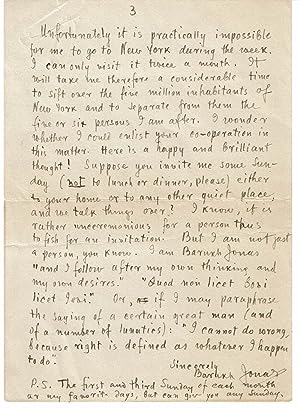 - A three-page letter with 490 words written by Barukh Jonas on two sheets of 7 inch high by 5 inch wide buff white paper. The letter is addressed to Mark Van Doren who, as literary editor of "The Nation", was likely the author of a laudatory article about Barukh Jonas which was published in the January issue of the periodical. Writing from West Orange, New Jersey, Barukh Jonas opens his letter by referring to his signature cart: "Altho the historical green cart is resting in a ravine near Cincinnati, my peregrinations continue, and I am now more or less permanently located within half an hour from your office." He goes on to mention that he is now working for Thomas Edison, likely in a capacity which preceded his work assisting the inventor with his research on rubber: "Mr. Thomas A. Edison, the world famous inventor, who happens to have read some of my books, has invented for me an occupation in his laboratory. This achievement of his, which can be best described as a workless job, will go down in history as one of his greatest contributions to human happiness. For all I have to do is to listen to about a hundred wonderful phonographic records a day and record their quality and their imperfections, if any. Now, I happen to be abnormally, insatiably and almost insanely fond of music, and Mr. Edison knows it." He goes on to explain that "Living now so close to New York, I visit that village once every two weeks, my object being to continue the quest you know of." Seeking to enlist Mark Van Doren's assistance with his Diogenes-like quest, he suggests "a happy and brilliant thought!" As he can't get to the city during the week, he proposes: "Suppose you invite me some Sunday (not to lunch or dinner, please) either to your home or to any other quiet place, and we talk things over? I know it is rather unceremonious for a person thus to fish for an invitation. But I am not just a person, you know." Signed "Barukh Jonas". Folded for mailing with tears along the edges of the folds of both sheets. The blank verso of the second sheet has been reinforced with archival linen tape and the tears along the edges of this first sheet have been repaired with clear archival document repair tape. There are also indentations from a paper clip to the top left corner of both sheets with a short tear to the first page along one of the diagonal indentations. Good. Barukh Jonas was the author of "The Roof of the Palace" published in Maumee, Ohio in 1926 and "The Feast of the Cannibals" published in Maumee, Ohio in 1927.Under the title "Authors with Lanterns", an article published in the January 12, 1927 edition of "The Nation" is attributed to "E" in the table of contents, likely signifying it was penned by the literary editor Mark Van Doren. He speaks of Barukh Jonas thus: "As Diogenes went about with a lantern to seek an honest man, so does Barukh Jonas, author, inventor, and lecturer, travel on foot with his two-wheeled camping outfit to seek intellectually inclined men and women. He is an independent writer, and his work, although quite simple, can be understood and appreciated only by one person out of ten thousand. And he is making it his business to find that extremely small minority. While passing through your city Barukh Jonas will permit himself to call on you. He would like to deliver in your locality a lecture entitled The Feast of the Cannibals, with is an exposition of The Intellectualistic Idea. Whether Mr. Jonas has arrived in New York we know not, nor do we know that he intends coming here. But we received this notice a few weeks ago and have been waiting for news of him. Perhaps there is as little hope of seeing Mr. Jonas's cart as there is of catching a gleam from Diogenes's lantern.What interests us in Mr. Jonas, with whom we have corresponded, is that his writings are despised by publishers and that he has done something about it. He has published his own books -- the latest one, 'The Roof of the Palace,' having been printed out i. Bestandsnummer des Verkäufers 36692