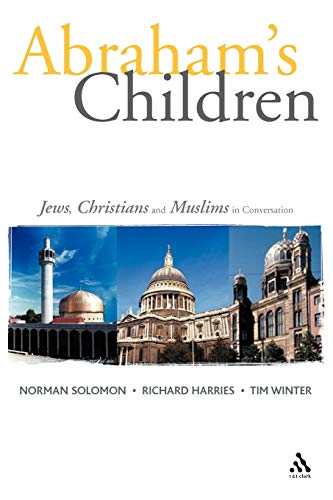 Language: English. Brand new Book. Abraham's Children brings together essays by leading scholars of each faith to address key issues for the faiths and to collaboratively identify common ground and pose challenges for the future. The book will inspire readers in the process of inter-faith dialogue, contribute clearly to vital religious issues of contemporary world concern and help readers to understand faiths that are different from their own. Buchnummer des Verkäufers BZE9780567081612

Book Discussion in Jewish Herald-Voice -15 June 2006 "profound and scholarly"Rachel Montagu, Common Ground "a treasure trove of perspectives arising from actual diologue between representatives of the Abrahamic religions... All the essays maintain a human quality.... They stimulate and provoke while expressing a mood of respect, without covering over differences in an easy pluralism." Reviewd by Stephen Ibbotson in Baptist Times, 2008 Included in Publishing News' Religious Books feature, 2nd December 2005. "One can nitpick over the choice of topics (Where is Israel, land, fundamentalism, scripture, democracy, free speech, or violence/just war?), but this may simply point to the need for a second volume. There is, however, a more appropriate problem to note here: the book's format. Although effort was made to provide something of a commentary and discussion on each chapter topic (through concluding essays by the editors), these discussions tend simply to repeat the ideas of the essays (in places annoyingly so) with what I can only describe as integration as a final goal...Admittedly, the editors never promise to capture the full ethos or expression of the meetings, but it would have been helpful to have something more of the exchange represented...The dialogue in this collection tends to emphasize similarities, at times researching or stretching to find them." -Joel N. Lohr, Review of Biblical Literature, August 2008 "profound and scholarly" Rachel Montagu, Common Ground "Abraham's Children examines the ket issues which unite or divide Jews, Christians and Muslims today" Baptist Times, December 2007 "This book's interfaith exercise in mutual understanding could help to promote more cooperation between the three religions in environmental protection."--Sanford Lakoff "the standard of all the essays is uniformly high and the style lucid" "This collection is hugely valuable" "special congratulations must go to the editorial team for nursing such a superb collection and binding it together with such plausibility." "this book will be immensely useful for all sorts of purposes"--Sanford Lakoff ""Abraham's Children: Jews, Christians and Muslims in Conversation "is a wonderful compilation of essays by knowledgeable Jewish, Christian and Islamic scholars.... The book serves as an excellent resource for anyone interested in discovering the views on pluralism, gender, the environment and life and death from these three monolithic faiths."- Allan F. Wright, "Catholic News Service, "December 15, 2006--Sanford Lakoff Title mention in Church of England Newspaper, 21 July 2006--Sanford Lakoff "Church Of England Newspaper " '[T]he reader has 27 perspectives, with brief summaries from the editors. The result is an informative exploration of how each has engaged with the other.' Rt Revd Dr Cragg, Church Times, 22/09/2006--Sanford Lakoff "Church Times " 'This is the book for our troubled times....in reading and meditating on this lovely book, we can avoid the despair shown by Huntington and Falwell.' Gordon Graham, Church of Ireland Gazette, 13/10/2006--Sanford Lakoff "A dialogue at whatever level between Jews, Christians and Muslims is to be highly applauded, particularly, as in this collection of essays, where the dialogue involves theological principles and beliefs. A theological dialogue along the varied themes of this work is a significant undertaking, and the authors should be thanked for their work." - Mario O. Souza, CSB, Toronto Journal of Theology, July 2008--Sanford Lakoff "It is impressive that such an erudite but carefully focussed book can be written at all from its triple launch-pad....there is illumination on almost every page" ANVIL Vol.25 No.2 2008 --Sanford Lakoff "Rabbi Solomon acknowledges that within the space of the Oxford Abrahimic interfaith dialogue, apologetics and selectiveness play a role in shaping the presentations. Yet, he argues, the continued existence of such a group directly challenges those who reduce reality to a conflict between civilizations, between Islam and the West." -"Jewish Herald-Voice, "June 2006 "Distinguished scholars from all three faiths examine the key issues which either unite or divide Jews, Christians and Muslims today and offer constructive suggestions for developing mutual understanding. Abraham's Children is the product of the fruitful interaction of the Oxford Abrahamic Group. Its contributors demonstrate that faith cannot be shared more widely without an acute awareness of the questions the world poses." -"SirReadaLot.org, "June 1, 2006