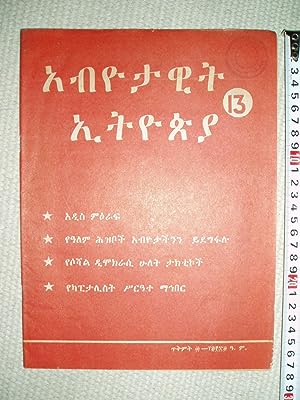 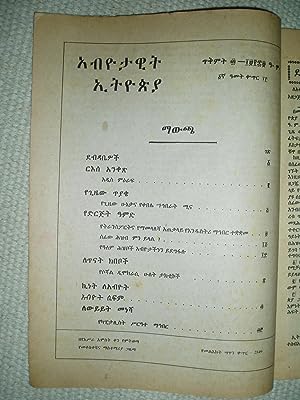 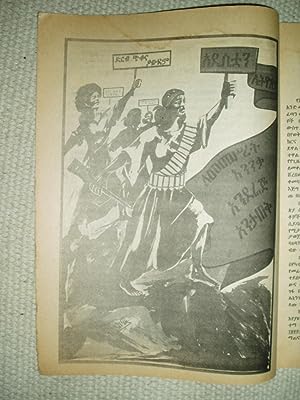 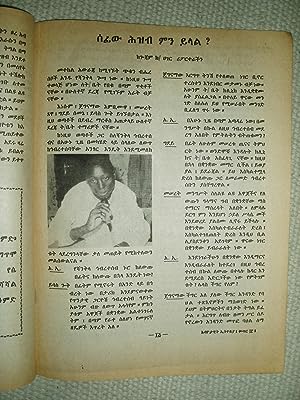 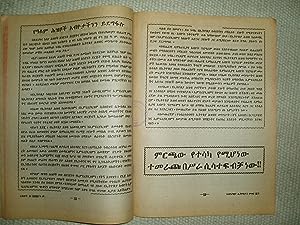 27x20cm, 36 pp., Top-edge waterstained. Date of publication given as 1969 (Ethiopian calendar) [ca.1976-1977 Gregorian calendar]. Text entirely in Amharic. This is Issue nr. 13 of the bi-weekly periodical " Revolutionary Ethiopia", issued by the The Provisional Office for Mass Organizational Affairs (POMOA), active from 1975 to 1979 ["POMOA functioned as a forum to involve different Marxist-Leninist organizations in the revolutionary process and to politicize and organize the masses. POMOA was set up through a decree of the Derg military junta in December 1975. The existence of POMOA was publicly revealed on April 21, 1976 following the announcement of the National Democratic Revolution Programme.,.,.The organization was conceptualized not as a political party, but as a 'popular revolutionary front'.,.,.Through POMOA the Derg military junta received political support (in the face of opposition from the EPRP), especially through the building of organizational structures in the provinces. But the Derg was wary of the dominance of the All-Ethiopian Socialist Movement (Meison) over POMOA. .,.,Membership in POMOA was kept secret. Five political groups were active inside POMOA; Meison, Waz League,the Ethiopian Marxist-Leninist Revolutionary Organization (Malerid), Echat and Seded.,.,.On September 26, 1976, EPRP unleashed a campaign of assassinations against POMOA cadres. The first prominent victim of the EPRP assassination spree was Fikre Merid (Meison leader and POMOA Committee member), who was shot in his car in Addis Abeba. The campaign of Red Terror began in March 1977, as POMOA kebele militia squads and the army attacked the EPRP.,." - wikipedia]. Some page browning. Rubberstamps to cover & some pages. Good. Buchnummer des Verkäufers 029189