Verwandte Artikel zu The Adventures of Hajji Baba of Ispahan

Home Morier, James The Adventures of Hajji Baba of Ispahan 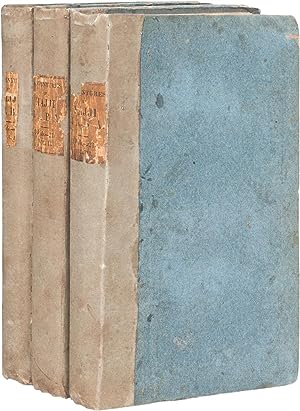 The Adventures of Hajji Baba of Ispahan

3 vols. 1st edition, 1st printing with the dedication to Dr. Fundgruben intact. The first peek into Persia, the best ever capturing of what it was in that time, fact or fiction, and still the most popular Oriental novel in English. Original boards, sympathetically rebacked with identical gray paper, original paper labels laid down. Vol. I label 70% chipped, vol. III label with a smaller chip, all 3 grubby, name on pastedowns, but very good, scarcer in boards uncut, than Internet clicks on the "I am under 18" button, and not to be compared to rebound sets, or mistaken for its sequel, The Adventures of Hajji Baba of Ispahan in England (1828), which is easy to find, even in boards. At a pressing point of British colonial power, the Crown established a mission in Persia with an 1809 treaty of alliance. In 1810 they sent James J. Morier as Secretary of Embassy, and from 1814 to 1816 he served as Chargé d'Affaires. The choice was a brilliant one. Sir James observed without appearing to do so, represented Britain while seeming a fair arbiter, advanced their interests under the pretext of cooperation, made his presence digestible by adopting Qajar Persian customs, stayed quieter than a painting on a wall, and came away with an essential grasp of the culture, and an insight into the regime, not visible even to the natives. He returned home, published reports, and accounts of his travel, and then this novel, which he coyly disconnected from by presenting the picaresque narrative as merely his translation of the coming of age autobiography of one Hajji Baba, a wholly fictional, Candide like, character. In the charade, Hajji Baba tells the tale of his rise from poverty to become the Shah of Persia's emissary to Britain, but when he's recalled in disgrace, and possibly execution, he entrusts the diary of his life to Morier as his chosen facilitator for publication. It's an adventure to be sure, drawing splendid character portraits, and descriptions, but it's a satirical one, ridiculing Persian society as violent, the culture as scandalously dishonest and decadent, and the people as rascals, cowards, fools, and puerile villains. Bestandsnummer des Verkäufers 34

Titel: The Adventures of Hajji Baba of Ispahan


BASICS
Book entries include author (or its equivalent on non¿book items), title (or its equivalent on non¿
book items), place, date, a bibliographical conclusion, and a physical description, typically in that
order. Practical limits in a commercial listing preclude a complete deconstruction, but any aspect
chosen as a digression, for any particular entry, follows the evaluation of many relevant factors at
once, their interdependence, their related importance, and their consequences. We strive to...


Everything is sent via FedEx, at our expense, but we may take a week to get it wrapped. Purchases under $200, that are to be shipped out of the United States may be sent through a carrier other than FedEx.