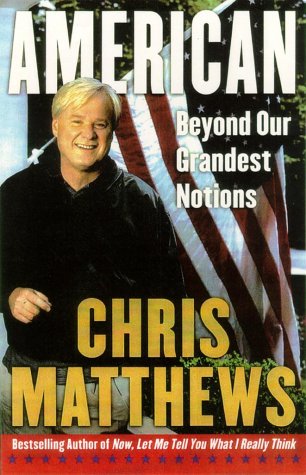 American: Beyond Our Grandest Notions

Titel: American: Beyond Our Grandest Notions

From Chris Matthews, host of MSNBC's "Hardball," star of NBC's "The Chris Matthews Show," and the "New York Times" bestselling author of "Now, Let Me Tell You What I Really Think" comes this celebration of the American Spirit.Fiercely independent, in love with freedom, convinced we can make it, we are like no other people on earth. We are a people reluctant to fight who become ferocious warriors when threatened or attacked. We are suspicious of governmental power, yet quick to embrace our flag in times of danger. A deeply practical nation, we loom as the world's great optimists.What unites us Americans is not so much language or ethnicity, but a set of distinct notions about ourselves that comprise our American-ness. The self-made country. The constant rebel. The reluctant warrior. The lone hero. The pioneer. The optimist. You see them all in the movies we make, the books we write, the history we have lived. What stirred the souls of our ancestors two centuries ago -- and all the generations in between -- still does.In "American," Matthews presents a portrait of a country that enters the world arena even today armed with an extremely potent weapon: the collective notions we carry of America at its best. We have saluted them in our popular culture, from "The Great Gatsby" to "Casablanca" to "Rocky," and throughout our American history, from 1776 to 9/11. Matthews paints a picture of more than just a nation challenged but a people ready and eager to prevail.


We guarantee the condition of every book as it's described on the Abebooks web sites. If you're dissatisfied with your purchase (Incorrect Book/Not as Described/Damaged) or if the order hasn't arrived, you're eligible for a refund within 7 days of the actual delivery date. If you've changed your mind about a book that you've ordered, please use the Ask bookseller a question link to contact us and we'll respond within 2 business days.