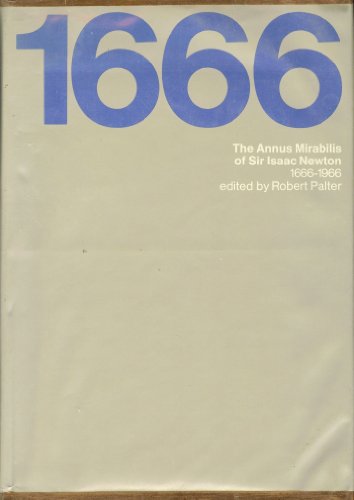 First Edition. viii, 351 pp. Original cloth, large 8vo. Nick in top of spine, else Near Fine, in dust jacket. Contains 16 essays, originally published in The Annus Mirabilis of Sir Isaac Newton. Tricentennial Celebration, The Texas Quarterly, Vol. X, no. 3, 1967 (287 pp). This volume also includes extensive "Comments" on the essays that were not published in the Texas Quarterly. Both the journal issue and this book are scarce. Buchnummer des Verkäufers 12166

At the beginning of 1665, when Isaac Newton was twenty-three years old, he returned to his native village for a period of two years to escape the plague that had closed down Cambridge University. He later wrote that these years were his most fruitful and creative, and recalls in particular that in 1666 he developed the integral calculus, experimentally verified the composite nature of light, and refined his gravitational theory to the point that he was able to satisfy himself through calculation that the earth's gravity holds the moon in orbit. Recent Newtonian scholarship has effectively called his memory into question somewhat on these points, but the "marvelous year" of 1666 may surely be taken as symbolic of a decisive turning point in the history of human thought.Three hundred years later, in order to commemorate Newton's best year by considering the whole of his life, work, outlook, and influence, the Conference on Newtonian Studies was held at the University of Texas. The articles in this book, many since expanded or revised, were originally prepared for that event. Their authors include not only Newton specialists but, in order to provide the widest perspective, general historians of ideas, of science, of art, of philosophy and religion, were invited as well. Several philosophers of science and practicing physicists have contributed evaluations of Newton's world within the framework of modern science.Another group of scholars was invited to write brief critical comments on most of the articles, and the dialogue that results, often spirited, will invite the reader to join in.The major articles and their authors are as follows: Introduction, Robert Palter. "I. Newton's Life and Society: " The Lad from Lincolnshire, Frank E. Manuel. Newton and His Society, Christopher Hill. "II. Newton's Scientific Achievements: " Newton and the Theory of Matter, A. Rupert Hall and Marie Boas Hall. Sources and Strengths of Newton's Early Mathematical Thought, D. T. Whiteside. Uneasily Fitful Reflections on Fits of Easy Transmission, Richard S. Westfall. Newton's and Leibniz' Dynamics, Pierre Costabel. Newton's Achievements in Dynamics, John Herivel. Newton's Second Law and the Concept of Force in the "Principia, " I. Bernard Cohen. Reactions of Late Baroque Mechanics to Success, Conjecture, Error, and Failure in Newton's "Principia, " C. Truesdell. Newtonian Cosmology, E. L. Schucking. "III. Philosophical Analysis of Newton's Scientific Achievements: " Newton and the Inductive Method, Robert Palter. Newtonian Space-Time, Howard Stein. The Philosophical Significance of Newton's Science, Dudley Shapere. "IV. Newton's Influence: " The Apotheosis of Newton in Art, Francis Haskell. Mechanical Philosophy and Hypothetical Physiology, William Coleman. The Religious Consequences of Newton's Thought, John Herman Randall, Jr.The critical comments were written by David Hakes, Lawrence Stone, Asger Aaboe, Thomas S. Kuhn, J. M. Briggs, Jr., Gerd Buchdahl, J. E. McGuire, A. E. Woodruff, and Jurgen Ehlers.