Verwandte Artikel zu Ask for Me Tomorrow: A Comedy-Drama in Three Acts for...

Home Hayes, Joseph Ask for Me Tomorrow: A Comedy-Drama in Three Acts for All Females 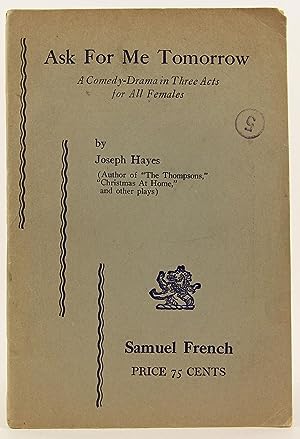 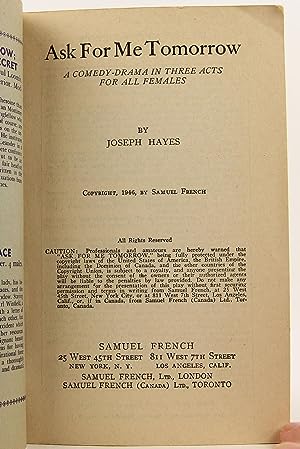 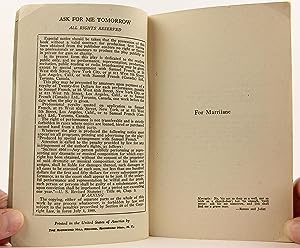 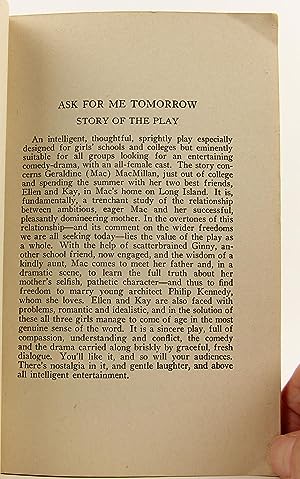 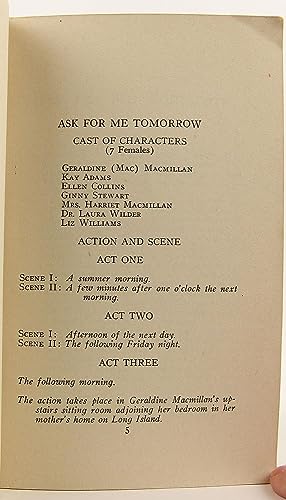 Ask for Me Tomorrow: A Comedy-Drama in Three Acts for All Females

B0170EXNNY 1946 first edition Samuel French (NY), 4 7/8 x 7 1/4 inches tall paperbound in pale grey covers printed in blue, 98 pp. plus scene diagram and publisher's ads. Slight to moderate soiling, sun fading, rubbing and edgewear to covers, with a number stamp to the front cover. Otherwise, apart from mild age toning and creasing to page tips, a very good copy - clean and unmarked - of this exceptionally scarce early play from award-winning playwright Joseph Hayes. ~SP40~ 'An intelligent, thoughtful, sprightly play especially designed for girls' schools and colleges but eminently suitable for all groups looking for an entertaining comedy-drama. The story concerns Geraldine (Mac) MacMillan, just out of college and spending the summer with her two best friends, Ellen and Kay, in Mac's home on Long Island. It is, fundamentally, a trenchant study of the relationship between ambitious, eager Mac and her successful, pleasantly domineering mother. In the overtones of this relationship - and its comment on the wider freedoms we are all seeking today - lies the value of the play as a whole.' - from Story of the Play which precedes the playscript. Joseph Hayes (1918 - 2006) was an American author and playwright, born in Indianapolis, Indiana. When he was thirteen, he entered a Benedictine monastery, staying there for two years. He graduated from Indiana University. In 1949, he brought 'Leaf and Bough' to Broadway. In 1954, he wrote the novel The Desperate Hours, his most successful work, which he brought to Broadway under the same name in 1955. He turned his play into the screenplay for the film version, also in 1955. He won an Edgar Award from the Mystery Writers of America for Best Motion Picture Screenplay for that screenplay in 1956. Hayes also won two Tony Awards. In 1962, he wrote his last script for Broadway, Calculated Risk, and also wrote Bon Voyage!, a Disney movie, in the same year. Buchnummer des Verkäufers SP40-1051-4510

Titel: Ask for Me Tomorrow: A Comedy-Drama in Three...