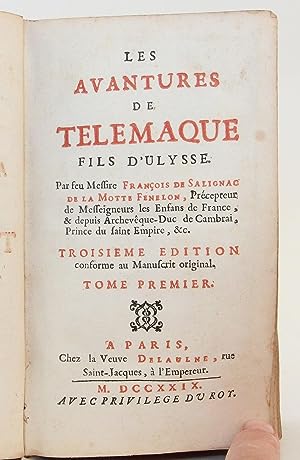 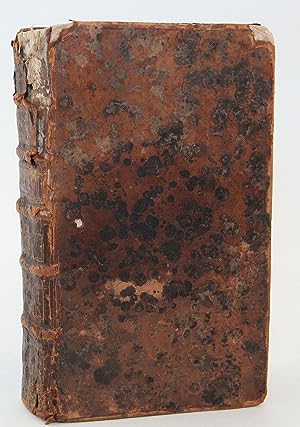 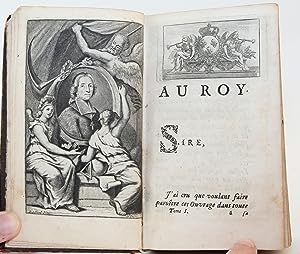 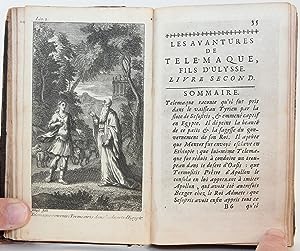 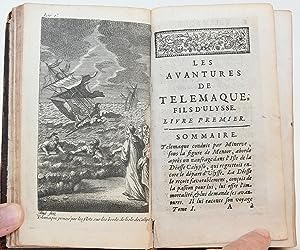 B00O6H1W32 In French. 1729 third edition Chez la Veuve Delaulne [House of the Widow Delaulne] (Paris), 4 x 6 3/4 inches tall full leather bound, five raised bands and gilt lettering to spine, marbled endpapers, title page in red and black, twelve full-page engravings, lx, 503 pp. Covers are bumped, rubbed and edgeworn, with cracking and chipping to the backstrip, especially the top inch, which is largely lacking. Pitting to the leather of both the front and rear boards. Prior owner names and nineteenth century inscription to front free-endpaper. Because there is a full-page engraving preceding the dedication and each of the twelve 'books' except the third book, it may be lacking this one engraving. Otherwise, apart from occasional very light soiling or foxing, a nice copy. This is Volume 1 only (of 2 volumes) of 'The Adventures of Telemachus, Son of Ulysses,' a scathing attack on the monarchy of France by Francois Fenelon, Archbishop of Cambrai and tutor to the seven-year-old Duc de Bourgogne (grandson of Louis XIV and second in line to the throne). It was published anonymously in 1699 and reissued in 1717 by his family. The slender plot fills out a gap in Homer's Odyssey, recounting the educational travels of Telemachus, accompanied by his tutor, Mentor, who is revealed at the end of the story to be Minerva, goddess of wisdom, in disguise. This third edition was edited by the Marquis de Fenelon, the author's grand-nephew. ~I~. Buchnummer des Verkäufers I-1041-1602