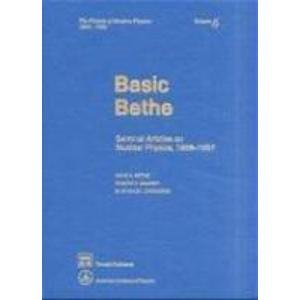 Facsimile Reprints of the original articles that constituted 'The Bethe Bible.' xi, 476 pp. Original cloth, large 8vo. Near Fine, without dust jacket (as issued). The History of Modern Physics, 1800-1950, Vol. 6. Reprints: 'Nuclear Physics. A. Stationary States of Nuclei.' Pp. 82-229; figs. 1-8; tables 1-19 in: Reviews of Modern Physics, Vol. 8, April 1936, No. 2. BETHE: 'Nuclear Physics. B. Nuclear Dynamics, Theoretical.' Pp. 69-244; figs. 9-27; tables 20-46 in: Vol. 9, April 1937, No. 2; LIVINGSTON & BETHE: 'Nuclear Physics. C. Nuclear Dynamics, Experimental.' Pp. 245-390; figs. 28-48; tables 47-76 in: Vol. 9, July 1937, No. 3. Bethe wrote 'three monumental review articles--one on atomic physics, one on solid-state physics, and one on nuclear physics. The article on nuclear physics, which appeared in three installments in Reviews of Modern Physics in 1936 and 1937 and became informally known as Bethe's Bible, was the first comprehensive treatment of the subject ever to appear in print. A routine review article is just that--a review, or summary, of published work. But Bethe's review articles went well beyond that. Wherever he found gaps in the literature, he filled them in. When he felt that the work of other physicists was incomplete or unclear, he redid it. He simply recreated the subject' (Bernstein, Hans Bethe, p. 5; see also pp. 44-5). Hans Albrecht Bethe: Nobel Prize, Physics, 1967, 'for his contributions to the theory of nuclear reactions, especially his discoveries concerning the energy production in stars.'. Buchnummer des Verkäufers 16291