Verwandte Artikel zu An Even Better Place: America in the 21st Century 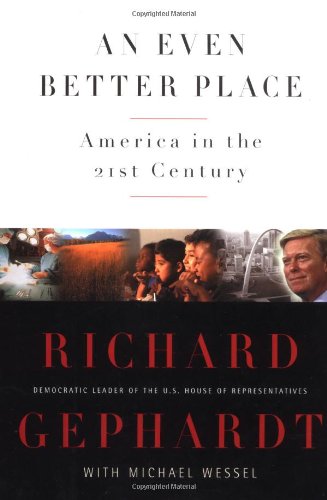 An Even Better Place: America in the 21st Century

This mix of memoir and political argument is a surprisingly personal and revealing guide to the bold thinking and innovative political ideas of the Democratic Leader of the Housewho is also one of the leading contenders for the presidency in the year 2000.. For over two decades, Congressman Richard Gephardt has been in the public eye. As a leader of the Democratic Party and a former presidential candidate, he is, after the president and vice-president, the most powerful Democrat in America. But many Americans have never heard what Gephardt really thinks about the challenges we now face as a nation and as Americans.Until now. An Even Better Place is the result of over a decade of work and thought about what we need to do to make our country better for our parents, our children, and ourselves. Part memoir and part argument, it comes at a time when politics as we know it has stagnated in bitter partisanship, when despite a booming economy, surprisingly few people feel secure, when our schools are getting worse and worse and our voter turnout less and less. Indeed, as Gephardt argues, American democracy itself is at risk. Meanwhile, a quiet crisis continues: families without adequate healthcare; experienced workers no unemployed; children growing up in poverty. And yet, as Gephardt explains, there is reason to hope. Solutions existsome easy, some hardand An Even Better Place is full of them.