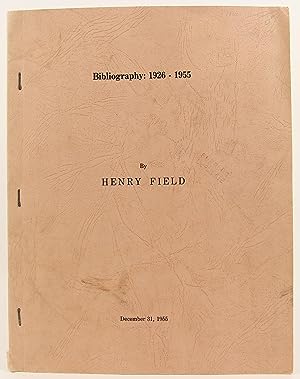 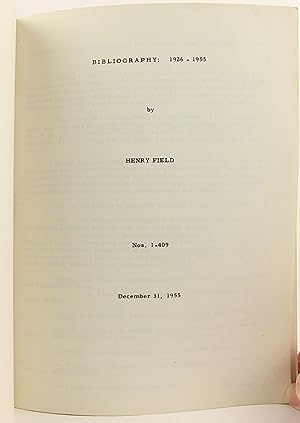 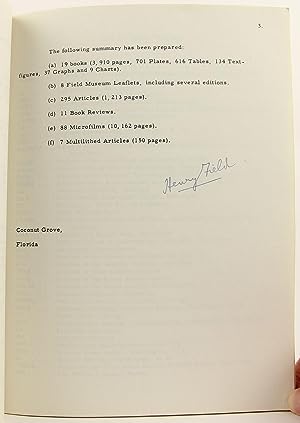 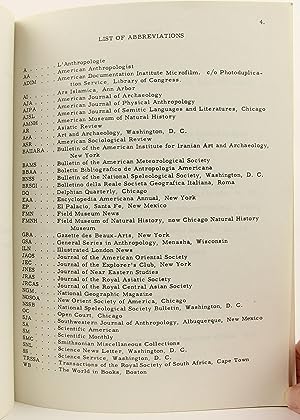 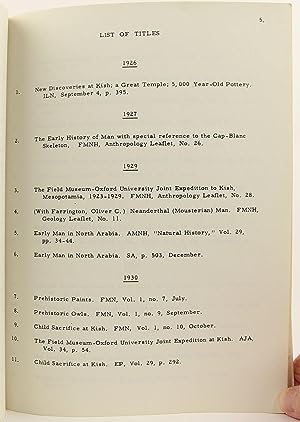 B01C1XD6EU 1955 signed first edition Henry Field [Coconut Grove, Florida], 8 3/8 x 10 7/8 inches tall stapled paperbound in pale pink printed wraps, pages printed on recto only, 43 ff. Light to moderate soiling, rubbing and edgewear to covers, with a faint stamp and a few faint pencil notations to the front cover. Date stamp (March 1, 1956) to lower margin of p. 2, and signed by field on p. 3. Otherwise, a clean, bright and unmarked copy of this rare 1955 bibliography produced by American anthropologist and archaeologist Henry Field (1902 - 1986). OCLC No. 16705550. Books signed by Field are rare. ~SP21~ 'This list of 409 titles includes and supplements my Bibliografia, which was published in Boletin Bibliografico de Antropologia Americana, Vol. 9, pp. 325-33, Mexico City, 1948, as well as previously distributed lists (Nos. 271, 325, 341, 342 and 383). The minor Errata have been corrected. Herein are also included the complete list of materials microfilmed in the American Documentation Institute . containing supplementary data to the published materials such as articles, statistical tables, photographs and foreign texts.' Covers anthropology, archaeology and anthropogeography of Asia, Africa, Europe, Central America, the Caribbean and South America. Born in Chicago, Henry Field was a great nephew of the merchant Marshall Field, and after getting his bachelor's degree in 1926 began working for the Field Museum of Natural History as assistant curator of physical anthropology, and serving in numerous expeditions on behalf of the museum and various universities, including University of Oxford. In 1934 Field was promoted to Head Curator of Physical Anthropology. One important acquisition Field made for the Museum was 'Magdalenian Girl,' which is still on display today and remains the most complete Upper Paleolithic skeleton available for study in North America. In 1941, just before America's entry into the Second World War, Field was asked to be the 'Anthropologist to the President' by president Roosevelt and to be a member of the Special Intelligence Unit of the White House to direct a top-secret 'M' (for migration) project. The President believed that refugee migration and re-settlement in areas where they would be given asylum and be able to thrive would be one of the biggest issues of the post-war era. He wanted Field to look at under-populated areas in North Africa and the Middle East as possible sites for their resettlement. Over 600 studies were produced. Field was a Research Fellow at the Peabody Museum of Archaeology and Ethnology at Harvard University from 1950 to 1969. He was a member of the University of California African Expedition (1947-48), and the Peabody Museum-Harvard Expedition to the Near East and Pakistan. He moved to Coconut Grove, Florida in the early 1950s and taught at the University of Miami beginning in 1966. Doubleday published his autobiography, The Track of Man, in 1952. Buchnummer des Verkäufers SP21-0261-5339