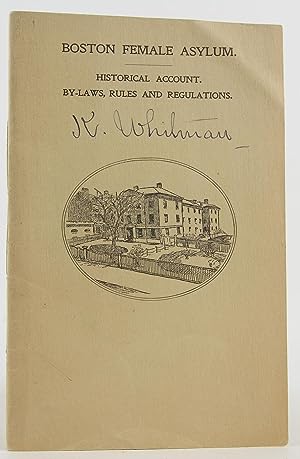 Board of Managers, Boston Female Asylum

B079WRDNJ7 1898-1900 Board of Managers, Boston Female Asylum / Beacon Press (Boston, Massachusetts), 4 7/8 x 7 1/2 inches tall stitched paperbound pamphlet in tan printed covers, 22 pp. plus a two-page addendum with rule changes passed by the Board of Managers in 1900. Slight soiling, rubbing and edgewear to covers, with prior owner name (Katharine Whitman, named in the pamphlet as a member of the Asylum Board of Managers) to the front cover. Bumping to upper tip of front cover, with resultant slight crease to the upper page tips throughout. Ms. Whitman has neatly written the names and addresses of the other Boston women who were serving as Asylum Board of Managers members at the turn of the century. The two-page addendum with 1900 rules changes - which is moderately creased - is pinned to the back cover with a period black straight pin. Otherwise, a very good copy - clean, bright and unmarked - of this rare artifact of a leading Boston orphanage at the turn of the twentieth century. Standard shipping orders upgraded free to First Class. ~I~ [0.5P] The Boston Female Asylum (1800-1910) was an orphanage in Boston, Massachusetts, 'for the care of indigent girls.' Its mission was to 'receive . protect . and instruct . female orphans until the age of 10 years, when they are placed in respectable families.' The Asylum was incorporated in 1803, when 'the only public charities then existing in our good town of Boston, except the Almshouse, were the Boston Marine Society, . the Boston Humane Society, . and the Boston Dispensary.' As late as 1886, some found notable that 'the asylum is under the direction of a board of lady managers.' At the time this booklet was issued, the Asylum was located on Washington Street in Boston. 'Beginning in 1902, the managers of the asylum came to feel strongly . in favor of the use of the family home for the care of children, in preference to the institution. Gradually their work took on new form, until, in 1907, the asylum was finally closed, and family home care was entirely substituted.' In 1910 the organization changed its name to the Boston Society for the Care of Girls. Some years later, it 'merged with the Boston Children's Aid Society in 1923 to form the Children's Aid Association.'. Buchnummer des Verkäufers I-0281-8729