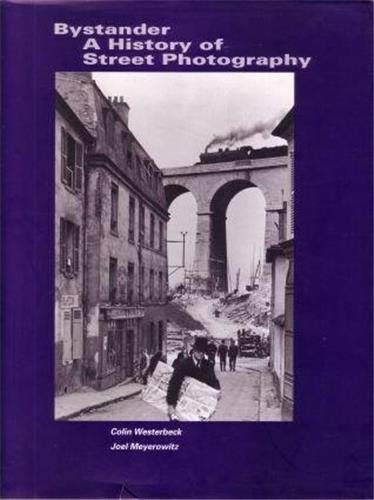 Bystander. A History of Street Photography.

Street photography is spontaneous, a moment captured by the camera. "Bystander" chronicles the development of a photographic genre created from the chaotic energy and chance juxtapositions of everyday street life. The setting might be a crowded city pavement, a country lane, a park, an underground station or cinema lobby - any public place where the photographer's subjects are privately engaged, either unknown to the photographer or unaware of his or her presence. Among the practitioners of street photography have been both anonymous amateurs and some of the most renowned photographers in the history of the medium - Atget, Cartier-Bresson, Brassai, Kertesz, Lartigue, Walker Evans, Ben Shahn, Alfred Stieglitz, Lisette Model, Gilles Peress, Robert Frank and Joel Meyerowitz. This book looks at the common ground of these photographers since 1839 - and in the process reveals much about the development of the photographic craft and its creative outlook. Profusely illustrated with examples from public and private collections in the United States and Europe, the book is organized into four parts: Atget and the 19th Century; Cartier-Bresson and Europe in the 20th Century; Walker Evans and pre-war America; Robert Frank and post-war America. Colin Westerbeck is associate curator of photography at The Art Institute of Chicago and writes extensively on photography. Joel Meyerowitz, now best known for his large-format colour photography, began his career as a street photographer.


We accept all major credit cards. Payment can also be made through our Giro account.