Verwandte Artikel zu The Catechism of the Shamans; Or, the Laws and Regulations...

Home The Catechism of the Shamans; Or, the Laws and Regulations of ... 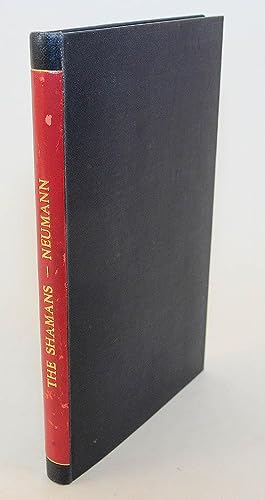 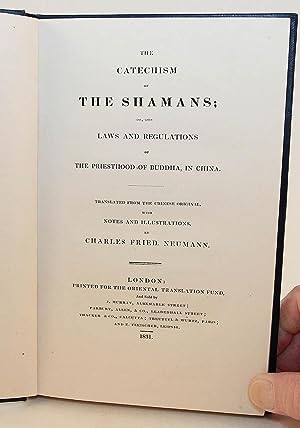 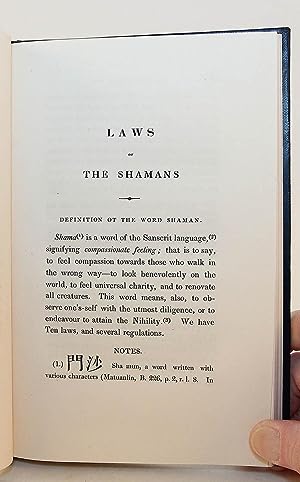 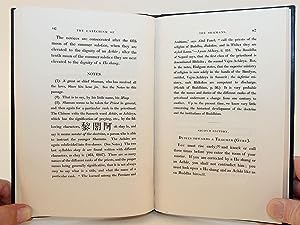 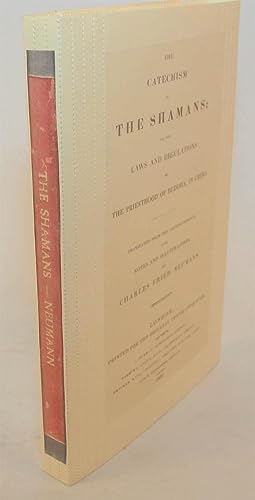 The Catechism of the Shamans; Or, the Laws and Regulations of the Priesthood of Buddha, in China. Translated From the Chinese Original, with Notes and Illustrations

B00JMOZ168 1831 first edition 'Printed for the Oriental Translation Fund, And Sold by J. Murray.' (London) 5 5/8 x 8 5/8 inches tall publisher's blue cloth hardbound, gilt lettering over red to spine, 152 pp. Book is preserved in a custom-made Brodart rare book box, made from archival-quality, acid-free, lignin-free, light tan folder stock, with Velcro closures, title page and spine reproduced on front cover and spine of the box. Slight staining, rubbing and edgewear to covers. One light crease and a couple of tiny stains to title page. Otherwise, a near fine copy - clean, bright and unmarked - of an important early book in English about Buddhism, especially uncommon in such pristeen condition in an original binding. A scarce issue, with Copac locating only a half dozen copies, and none recorded at auction over the last 30 years by ABPC. ~NNN~ The first edition of one of the earliest English works on Buddhism, appearing just two years after Edward Upham's eccentric 1829 work, 'The History and Doctrine of Budhism, Popularly Illustrated' (the first book published in English with the word Buddhism in its title). The editor of this work, 'The Catechism,' Charles [Karl] Friedrich Neumann (1793-1870), German orientalist, studied philosophy and philology at Heidelberg, Munich and Gottingen, became a convert to Protestantism from Judaism and took the name of Neumann (from his birth name of Bamberger). From 1822 to 1825 he was a teacher at Speyer; then he learned Armenian in Venice and visited Paris and London. In 1829 he went to China, where he studied the language and amassed a large library of valuable books and manuscripts. These, about 12,000 in number, he presented to the royal library at Munich. Upon his return to Germany in 1831, Neumann published this book, 'The Catechism of the Shamans,' and the also in 1831 two other translations, one from the Armenian, 'Vahram's Chronicle of the Armenian Kingdom in Cilicia' and one from the Chinese, 'History of the Pirates in the China Sea.' He was appointed professor of Armenian and Chinese at the University of Munich, a position he held until 1852, when he was removed for his liberal political and religious opinions. Ten years later he settled in Berlin, where he remained till his death. Neumann's 'Catechism' was generally well received, though an extensive review in the November 1832 journal The Chinese Repository points to a number of translation flubs in the book, saying that while they held Neumann in high regard 'although we cannot praise him for perfect accuracy, nor yield entire submission to all his German theories.' Among the reviewer's greatest critcisms is Neumann's failure to name many of his sources. Buchnummer des Verkäufers NNN-0441-516

Titel: The Catechism of the Shamans; Or, the Laws ...