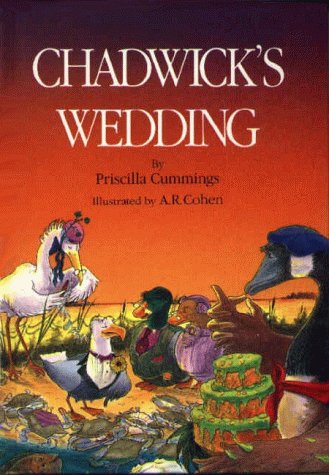 Sewn binding. Paper over boards. 30 p. Contains: Illustrations. Excerpted from the author's home page: "Most people think I'm from Maryland because I've written so many stories about CHADWICK THE CRAB and even set some of my novels, such as RED KAYAK, near the Chesapeake Bay. But actually, I grew up.on a dairy farm in western Massachusetts, far from the water. I loved living on a farm where I was surrounded by animals and always in touch with nature.As a young girl, I had other passions besides a love for animals. I enjoyed mountain climbing with my father, especially in the White Mountains of New Hampshire.I had a lot of freedom growing up. It was a different kind of world then, and I had many memorable adventures with my friends and siblings. But what I loved above all else was reading books and writing my own stories.I had very few books of my own, but my most treasured one, CHARLOTTE'S WEB by E.B. White, remains on my bookshelf today. As for writing, I began with stories about our farm animals. Often, I illustrated the tales and made them into little books. I still remember taking one of these books in to my first grade teacher who put stickers on the cover.When I was ten, I spent the summer writing my first chapter book (about a horse, of course) and in high school I tried my hand at reporting for the school newspaper.After graduating from the University of New Hampshire with a degree in English literature, I became a newspaper reporter. Over the next ten years I worked for four different newspapers in four different states. In 1981, I was honored as UPI's Journalist of the Year for Virginia after researching and writing a series of articles on women in prison. That same year, I moved to Maryland where I became a magazine writer and editor for three years. I met and married another writer, John Frece, who was then a reporter for the Baltimore Sun. It was in Maryland that I saw my first blue crab. I couldn't believe people actually steamed and ate blue crabs! I began reading about those interesting critters and when I learned that in winter, crabs burrow into the mud at the bottom of the Bay to sleep until spring, I began to wonder: what if there was a crab who didn't want to sleep all winter? What if there was a crab who had Big Dreams? Who wanted to be a star at the aquarium in Baltimore so he wouldn't have to sleep all winter? It was just a silly idea, but that's how it all started. My first book, CHADWICK THE CRAB, was published in 1986.Over the years, I wrote several more picture books about animals in the Chesapeake Bay. Baron von Heron, Toulouse the Canada Goose, Hector Spector Jellyfish, Orville the Oyster and Bernie the Sea Gull are just a few of the characters that are near and dear to my heart. But I had other stories to tell and I dreamed of writing novels, too. In 1997, my first novel for older children, AUTUMN JOURNEY, was published.Today, my home is in Annapolis, Maryland with my family. We have a small sailboat and a green canoe, but no red kayaks. We have two cats named Mr. Charles Bingley (Mr. B. for short) and Romeo." Good. No dust jacket. Ex-library. Signed by author. Usual library markings. Inscription on t-p signed by Cummings in 2001. Bestandsnummer des Verkäufers 68606

Wedding shells are ringing! Chadwick the Crab is getting married, and everyone is preparing for the big event! Esmerelda is choosing her bridesmaids. Baron von Heron is writing the ceremony (in rhyme, of course). Toulouse, the gourmet goose, is baking a corn and eelgrass cake. Then Chadwick begins to have second thoughts about marriage, and as if that weren't bad enough, Esmerelda disappears! Suddenly, the wedding is off and the search is on. Only then does Chadwick realize how much he loves the prettiest girl crab in all of Shady Creek. Early readeraages 5-8.