Verwandte Artikel zu Cheney One on One: A Candid Conversation with America's...

Home Rosen, James (Signed) Cheney One on One: A Candid Conversation with America's Most ...
Beispielbild für diese ISBN 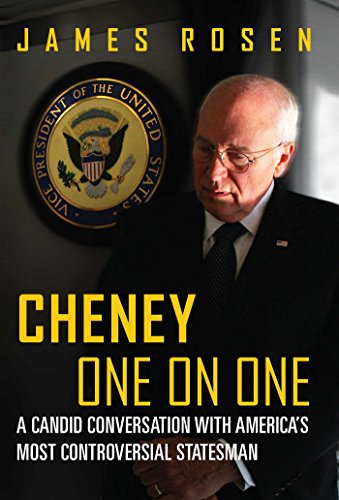 Cheney One on One: A Candid Conversation with America's Most Controversial Statesman

Book and DJ New. NO notes. No markings other than author signature. New DJ not price clipped ($27.99) ; Inscribed and signed by Rosen at title page. ; 324 pages; Signed by Author. Buchnummer des Verkäufers 59594

Titel: Cheney One on One: A Candid Conversation ...

"More than four turbulent decades at the epicenter of political life have made Dick Cheney one of the most consequential political figures in the nation's history. You will see important chapters of that history--including some that are still being writ- ten--differently after savoring this wonderfully conceived volume in which Cheney converses with one of Washington's most seasoned journalists." --GEORGE F. WILL, author, Pulitzer Prize--winning columnist, and Fox News commentator "Invaluable...James Rosen has given us a rare and compelling view of how Dick Cheney sees the world and himself. With searching questions and clear-eyed follow-ups, Rosen served as history's interlocutor in a series of revealing--and inevitably controversial--conversations." --JON MEACHAM, winner of the Pulitzer Prize and author of Destiny and Power: The American Odyssey of George Herbert Walker Bush "An essential document of modern America... With the depth of a historian and the instincts of an investigative reporter, James Rosen adds considerably to our under- standing of Dick Cheney and the administrations in which he served... Offers crucial context and fresh reporting on many of the most controversial decisions of the Bush- Cheney years... A must-read." --STEPHEN F. HAYES, senior writer for the Weekly Standard and author of Cheney: The Untold Story of America's Most Powerful and Controversial Vice President "Indispensable... James Rosen has a knack for asking probing, unusual, and some- times uncomfortable questions... His skill as an interviewer is vividly on display in the hours he spent interrogating Dick Cheney." --JONATHAN KARL, chief White House correspondent for ABC News "Fascinating, revelatory, and valuable... A contribution to our current political dia- logue that will also serve as a basic source for the historians of the future." --MICHAEL BESCHLOSS, author of Presidential Courage: Brave Leaders and How They Changed America, 1789--1989 "James Rosen skillfully lets Cheney be Cheney, bringing to life a third of a century on the front lines of history." --I. LEWIS LIBBY, former chief of staff to Vice President Cheney