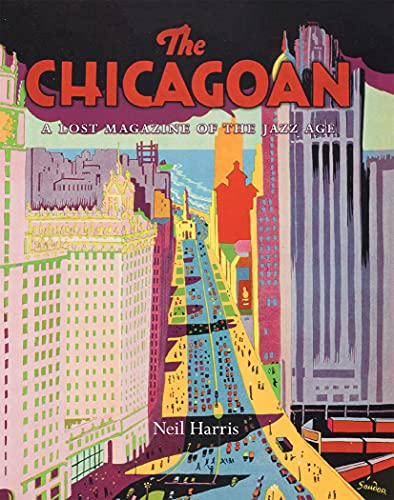 Chicagoan: A Lost Magazine of the Jazz Age

While browsing the stacks of the Regenstein Library at the University of Chicago some years ago, noted historian Neil Harris made a surprising discovery: a group of nine plainly bound volumes whose unassuming spines bore the name the' Chicagoan.' Pulling one down and leafing through its pages, Harris was startled to find it brimming with striking covers, fanciful art, witty cartoons, profiles of local personalities, and a whole range of incisive articles. He quickly realized that he had stumbled upon a Chicago counterpart to the 'New Yorker' that mysteriously had slipped through the cracks of history and memory. Here Harris brings this lost magazine of the Jazz Age back to life. In its own words, the 'Chicagoan 'claimed to represent 'a cultural, civilized, and vibrant' city 'which needs make no obeisance to Park Avenue, Mayfair, or the Champs Elysees.' Urbane in aspiration and first published just sixteen months after the 1925 appearance of the 'New Yorker,' it sought passionately to redeem the Windy City's unhappy reputation for organized crime, political mayhem, and industrial squalor by demonstrating the presence of style and sophistication in the Midwest. Harris's substantial introductory essay here sets the stage, exploring the ambitions, tastes, and prejudices of Chicagoans during the 1920s and 30s. The author then lets the' Chicagoan' speak for itself in lavish full-color segments that reproduce its many elements: from covers, cartoons, and editorials to reviews, features--and even one issue reprinted in its entirety. Recalling a vivid moment in the life of the Windy City, the' Chicagoan' is a forgotten treasure, offered here for a whole new age to enjoy. Uncovering a Chicago counterpart to 'The New Yorker,' noted historian Harris presents the Second City's magazine's lavish full-color segments, from covers, cartoons, and editorials to reviews, features--and even one issue reprinted in its entirety. Buchnummer des Verkäufers 20101002104808

Titel: Chicagoan: A Lost Magazine of the Jazz Age

"Two remarkable facts lie at the heart of this beautiful and revelatory book: that the Chicagoan existed at all, and that its existence has been so completely forgotten. Nothing that I knew of Chicago's cultural life prepared me for Neil Harris's discovery of this wonderfully worldly magazine. And, like him, I cannot figure out why it disappeared from historical memory. We owe Harris great gratitude for resurrecting the Chicagoan for us. His commentary verifies his reputation as one of the most learned and insightful cultural historians at work today, and as an enviably graceful and lucid writer." - Carl Smith, author of The Plan of Chicago: Daniel Burnham and the Remaking of the American City"