Verwandte Artikel zu The Christian's Pattern: or, A Treatise of the...

Home KEMPIS (T.a). STANHOPE (G), trans. The Christian's Pattern: or, A Treatise of the Imitation of ... 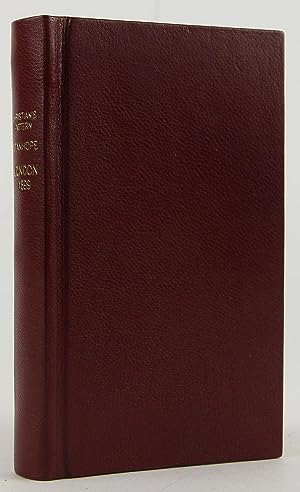 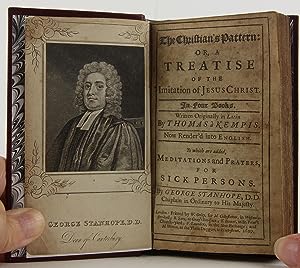 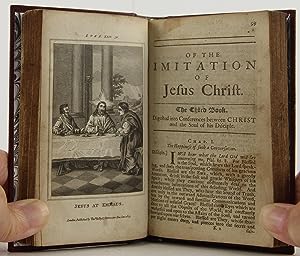 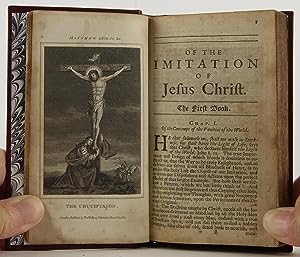 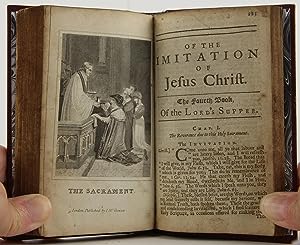 The Christian's Pattern: or, A Treatise of the Imitation of Jesus Christ. In Four Books. [Stanhope Translation, Second Edition]

B004ALCOT0 1699 second Stanhope edition, 'Printed by W[illiam] Onley for M. Gillyflower, R. Sare, T. Bennet, F. Saunders and M. Wotton' (London), 3 1/2 x 5 3/4 inches tall full red leather bound, gilt lettering to spine, marbled endpapers, engraved frontispiece portrait of Stanhope and full-page engraving printed by Thomas Kelly preceding each of the four books, [12], 271, [1], ii, 38 pp., complete. Title page is moderately soiled, and has a one-inch closed tear from the left side of the page to the gutter. Quarter-inch closed tear to edge of following leaf (dedication). Otherwise, apart from a few pages with light marginal staining or foxing, a very good copy of the scarce second edition of this George Stanhope edition, which was reprinted over the ensuing years more than twenty times. In fact, Stanhope's was likely the most popular English edition of the Imitation of Christ throughout the eighteenth century and into the nineteenth, and the first and second editions of this translation are rare. The second edition employs engravings different than all other Stanhope editions, and is the smallest of them in size. References: Wing (2nd ed.), T946B; ESTC No. R220858. The English Short Title Catalog records only nine copies at institutions worldwide, with only three of those in North America (Harvard, Princeton and UCLA), and American Book Prices Current shows no copies coming up for auction in the past 30+ years. ~KM2~ George Stanhope (1660-1728) was a clergyman of the Church of England, rising to be Dean of Canterbury and a Royal Chaplain, and a leading figure in church politics of the early 18th century. Despite the popularity of this translation of the Imitation, as well as prior translations or adaptations of Epictetus, Charron's 'Books on Wisdom' and and Meditations by Marcus Aurelius, Stanhope's style has been criticized as overly paraphrastic, using 'flowing sentences that pleased the reader in Queen Anne's reign.' The Imitation of Christ was written by Catholic monk Thomas Kempis (circa 1380-1471), as four separate books completed between 1420 and 1427, at Mount Saint Agnes monastery, in the town of Windesheim, located in what is now the Netherlands. He wrote these works for the instruction of novices of his Augustinian monastic order, followers of Geert Groote's Brethren of the Common Life. But the writings quickly became popular among all the literate faithful. There is probably no other book apart from the Bible which has been printed in so many editions and translations. Buchnummer des Verkäufers KM4-0871-7928

Titel: The Christian's Pattern: or, A Treatise of ...

Verlag: Printed by W Onley for M. Gillyflower in Westminst