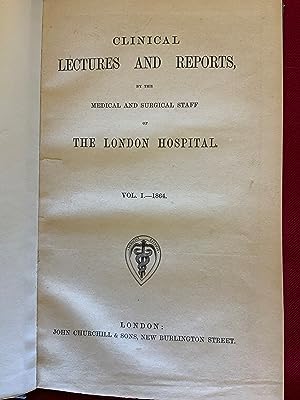 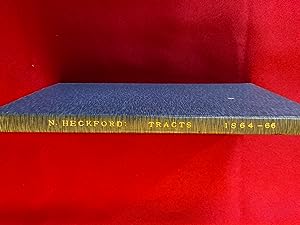 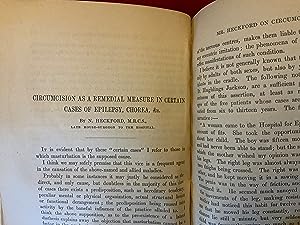 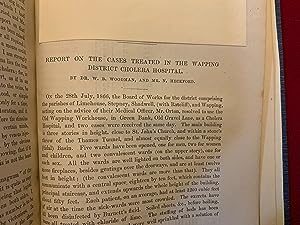 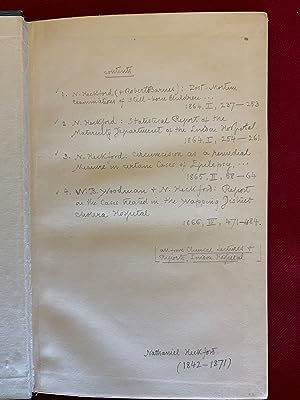 Clinical Lectures and Reports, by the Medical and Surgical Staff of The London Hospital: four papers by Nathaniel Heckford

Four papers extracted from the journal, Clinical Lectures and Reports, by the Medical and Surgical Staff of The London Hospital, bound together in blue cloth-covered boards, all written by Nathaniel Heckford. Near fine. "Dr. Nathaniel Heckford (1842 1871) was a paediatrician in Victorian London, who founded the East London Hospital for Children. He met his future wife, Sarah Goff, during the 1866 cholera epidemic in Wapping, where he first determined a need for a children's hospital in the East End of London. Heckford died of tuberculosis (then known as consumption) at the age of 29. The hospital started in 1868 in a warehouse in Ratcliffe, and moved after his death to Glamis Road, Shadwell. It was the first London hospital for children under two years of age. It was described in some detail by Charles Dickens in two pieces called 'A Small Star in the East' and 'On An Amateur Beat' published in The Uncommercial Traveller." Blue cloth-covered boards, gilt spine lettering ("N. Heckford: Tracts 1864-66"), 9 x 5 5/8 inches, contents written neatly in pencil on the front free endpaper: 1) N. Heckford (& Robert Barnes): Post Mortem Examinations of Still-born Children. 1864, I, 237-253; 2) N. Heckford: Statistical Report of the Maternity Department of the London Hospital. 1864, I, 254-261; 3) N. Heckford: Circumcision as a Remedial Measure in Certain Cases of Epilepsy. 1865, II, 58-64; 4) W.B. Woodman & N. Heckford: Report on the Cases Treated in the Wapping District Cholera Hospital. 1866, III, 471-484 (also included is an appendix, "Notes on the Cholera Epidemic of 1866", pp 435-442). Heckford was also the author of: "Practical sailing Directions and coasting guide from the Sand Heads to Rangoon, Maulmain, Akyab and vice versa; with a table for the dangerous Gulf of Martaban, sets of current, and description of the land. To which is added directions for the entire Bay of Bengal and Straits of Malacca.to which is dded Directions for the Entire bay of Bengal." (K036). Bestandsnummer des Verkäufers 4658

Titel: Clinical Lectures and Reports, by the ...