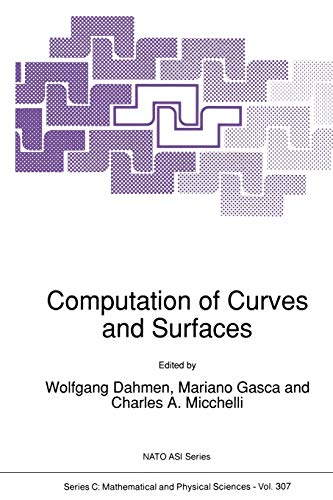 Computation of Curves and Surfaces (Paperback)

Titel: Computation of Curves and Surfaces (...

Assembled here is a collection of articles presented at a NATO ADVANCED STU­ DY INSTITUTE held at Puerto de la Cruz, Tenerife, Spain during the period of July 10th to 21st, 1989. In addition to the editors of these proceedings Professor Larry L. Schumaker from Vanderbilt University, Nashville, Tennessee, served as a member of the international organizing committee. The contents of the contribu­ tions fall within the heading of COMPUTATION OF CURVES AND SURFACES and therefore address mathematical and computational issues pertaining to the dis­ play, modeling, interrogation and representation of complex geometrical objects in various scientific and technical environments. As is the intent of the NATO ASI program the meeting was two weeks in length and the body of the scientific activities was organized around prominent experts. Each of them presented lectures on his current research activity. We were fortunate to have sixteen distinguished invited speakers representing nine NATO countries: W. Bohm (Federal Republic of Germany), C. de Boor (USA), C.K. Chui (USA), W. Dahmen (Federal Republic of Germany), F. Fontanella (Italy), M. Gasca (Spain), R. Goldman (Canada), T.N.T. Goodman (UK), J.A. Gregory (UK), C. Hoffman (USA), J. Hoschek (Federal Republic of Germany), A. Le Mehaute (France), T. Lyche (Norway), C.A. Micchelli (USA), 1.1. Schumaker (USA), C. Traas (The Netherlands). The audience consisted of both young researchers as well as established scientists from twelve NATO countries and several non-NATO countries.