Verwandte Artikel zu Contradictions and Dilemmas: Studies on the Socialist... 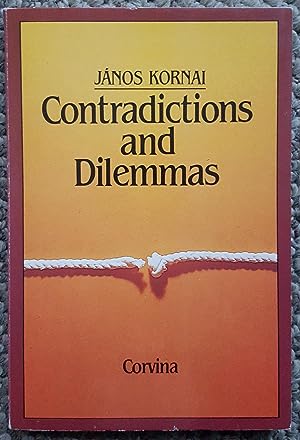 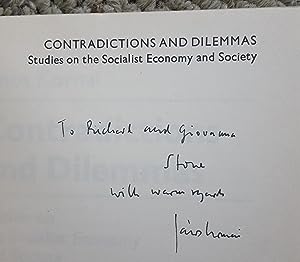 Contradictions and Dilemmas: Studies on the Socialist Economy and Society. (Inscribed by Kornai to Nobel Prize winning economist Richard Stone.)

First Edition in English of Ellentmondások és dilemmák (1st Hungarian ed., 1983). Original wrappers. Very Good. Inscribed: 'To Richard and Giovanna Stone/ with warm regards Janos Kornai.' Note: MIT Press published a clothbound edition of this book in 1986, the year he joined the Harvard faculty, but this original English edition published the previous year by Corvina is much less common. 'It is surprising that János Kornai has not been awarded the Nobel Prize' (M. A. Lebowitz, 'Kornai and the vanguard mode of production', Cambridge Journal of Economics, Vol. 24, Issue 3, pp. 377-392). The Sveriges Riksbank Prize in Economic Sciences in Memory of Alfred Nobel 1984 was awarded to Richard Stone (1913-1991) 'for having made fundamental contributions to the development of systems of national accounts and hence greatly improved the basis for empirical economic analysis.' 'Attending a conference in Geneva in 1971, I met again with the great British economist Richard Stone, whose acquaintance I had made on my first trip to England in 1963. He asked me to speak to him privately and told me he would be glad to invite me permanently to Cambridge University. There was tension mounting there between two groups, one of mathematical economists, headed intellectually by Frank Hahn, and the other of opponents of such methods, centering around Joan Robinson and my fellow countryman Nicholas (later Lord) Kaldor. His probings of opinion so far suggested to him that both sides would be pleased to see me given a chair, a development that might even help to ease the tension. He offered me the professorship not on his own initiative, but on behalf of his colleagues. . . . Stone was no ivory-tower scholar cultivating abstract theories; rather, he was interested in research that directly assisted practice. He headed the team devising the UN-approved system of accounting and statistics that ensures uniformity and comparability in international economic statistics. Stone won the Nobel Prize a few years later. His character easily encompassed both dedication to scholarly work and the enjoyment of the pleasures of daily life. He dressed with unusual elegance, and he loved good food and drink. He occupied many social positions, the one he was especially proud of being the presidency of the 'Wine Committee' of King's College. This committee was entrusted with deciding what wines to buy for the college cellars' (Kornai, By Force of Thought, MIT Press, 2006, p. 219). Buchnummer des Verkäufers 21006

Titel: Contradictions and Dilemmas: Studies on the ...