Verwandte Artikel zu The Countermine: Or, a Short, but True Discovery of...

Home Nalson, John The Countermine: Or, a Short, but True Discovery of the ... 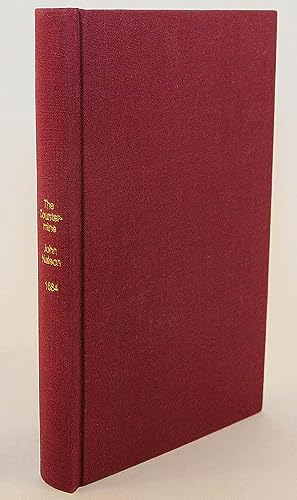 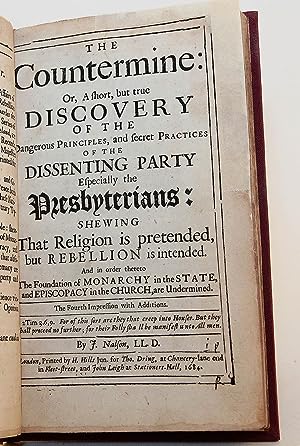 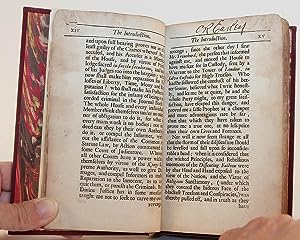 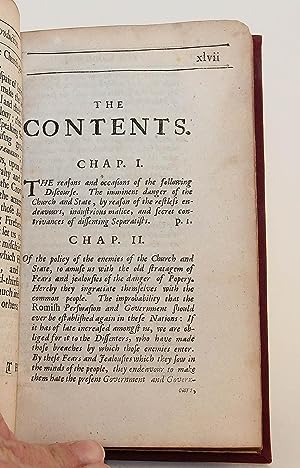 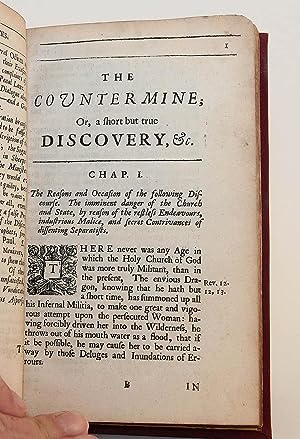 The Countermine: Or, a Short, but True Discovery of the Dangerous Principles, and Secret Practices of the Dissenting Party Especially the Presbyterians: Shewing That Religion Is Pretended, but Rebellion Is Intended. .

B00JRDP3GC 1684 'Fourth Impression with Additions,' 'Printed by H. Hills Jun. for Tho. Dring, at Chancery-lane end in Fleet-street, and John Leigh at Stationers-Hall' (London) 4 3/4 x 7 1/4 inches tall burgundy cloth hardbound, gilt lettering to spine, marbled endpapers, [4], lvi, 212 pp. With initial advertisement leaf ('Books Writ by the Author') and both blank endpapers, complete. An important early anti-Presbyterian polemic. Very slight rubbing to covers. Paper repairs to upper tips of first five leaves, with slight worming to the upper margins of the next five leaves, not effecting text. 1879 ink prior owner name to front free-endpaper and top margin of page xv, by Dr. Charles Richard Earley (1823-1898), a well known physician in Ridgway, Pennsylvania. Crudely repaired two-inch closed tear to margin of one page, not effecting legibility of text. Rear free-endpaper foxed and edge-chipped, lacking the lower tip. Otherwise, apart from foxing or creasing to an occasional page, a nicely preserved copy of an exceptionally scarce edition of this controversial work. References: Wing (1996) N100; ESTC No. R232420. This is one of two issues of the fourth impression, both of which are rare - in the other, ESTC No. R37717, the edition statement reads 'The fourth impression with editions' [sic]. The English Short Title Catalog records only three copies of each variant in collections worldwide. Only one copy of this imprint recorded in North America, at the Huntington Library, with the other two copies at the British Library and Oxford University's All Souls College. ~OOO~ Ian Higgins in 'Jonathan Swift's political confession' (2010) discusses the influence on Swift (1667-1745) of writers such as John Nalson, who is one of those named as among the literary canon of 'ironical, satirical, and polemical Divines' in the last work of English philosopher Anthony Collins (1676-1729), 'A Discourse Concerning Ridicule and Irony in Writing' (1729). Higgins describes Nalson as 'a prolific polemical writer against Presbyterianism and the sects,' and says his vitriolic works, especially against Catholicism, are 'part of the arsenal upon which Swift drew in his satire.' John Nalson (1638?-1686) was an English clergyman, historian and early Tory pamphleteer. He was an active polemical writer on the side of the government during the latter part of the reign of Charles II. This work, 'The Countermine,' first published in 1677, quickly went through three editions, and was highly praised by Roger L'Estrange (1616-1704). Published anonymously, and once incorrectly attributed to John Bramhall, its real authorship was soon discovered, and the parliament of 1678, in which the opposition, whom he had attacked, had the majority, resolved to call Nalson to account. On 26 March 1678 he was sent for on the charge of having written a pamphlet called 'A Letter from a Jesuit in Paris, showing the most efficient way to ruin the Government and the Protestant Religion,' in which the names of various members of parliament were introduced. After being kept in custody for about a month, he was discharged, but ordered to be put out of the commission of the peace, and to be reprimanded by the speaker (1 May). Nalson's major work is the 'Impartial Collection of the Great Affairs of State, from the beginning of the Scotch Rebellion in the year 1639 to the murder of King Charles I.' His only other historical work was 'A True Copy of the Journal of the High Court of Justice for the Trial of K. Charles I' (1684). Full title of the work for sale: 'The countermine: or, A short, but true discovery of the dangerous principles, and secret practices of the dissenting party especially the Presbyterians: shewing that religion is pretended, but rebellion is intended. And in order thereto the foundation of monarchy in the state, and episcopacy in the church, are undermined. The fourth impression with additions. By J. Nalson, LL.D.'. Buchnummer des Verkäufers OOO-0441-550

Verlag: Printed by H. Hills Jun. for Tho. Dring