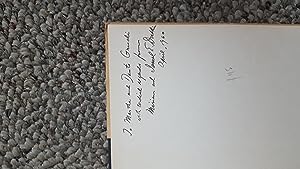 Cylindric Algebras. Part I. With an Introductory Chapter: General Theory of Algebras. Studies in Logic and the Foundations of Mathematics vol. 64. (SIGNED, PRESENTATION COPY FROM ALFRED TARSKI TO BJARNI JÓNSSON.)

vi, 508 pp. Original cloth. Very Good. Inscribed on the half-title by Tarski: 'To Bjarni Jónsson/ with warm regards from the authors/ Alfred Tarski.' Also signed by Henkin. An extraordinary association copy. Jónsson was Tarski's first student in the United States (Andrzej Mostowski was Tarski's only previous student in Poland). The Jónsson-Tarski duality takes its name from two papers they co-authored in 1951 and 1952. Fifty years after earning his Ph.D, Jónsson wrote in a 1995 letter to Anita Burdman Feferman: 'I have not yet thought of another person, living or dead whom I would rather have had as a teacher. . He combined an extraordinary mathematical ability with an outstanding talent as a communicator and a willingness to share his ideas with others' (Feferman & Feferman, Alfred Tarski: Life and Logic, p. 3). Jónsson 'signed up for an algebra course with no idea that Tarski, the instructor, was someone of international reputation: 'The subject matter was quite traditional, mostly matrix theory. He adhered to the course description in the text, but occasionally made allusions to other topics. At the beginning of the spring semester I asked if I could sign up for a reading course with him, and when he asked what subject I had in mind, I told him that he had mentioned set theory and the foundations of mathematics in class and that I would like to find out more about these. . He suggested that we start with set theory, beginning by reading Hausdorff's classic Mengenlehre. This opened up a whole new world for me.' Feferman & Feferman discuss Jónsson on pp. 3, 154, 155 [photo], 156, 158, 171, 191, 192, 195, 234 [group photo], 385, 393, 400, 401. Jónsson and Tarski co-wrote Direct Decompositions of Finite Algebraic Systems (1947), the appendix to Tarski's Cardinal Algebras (1949), and 'Boolean Algebras with Operators' (Amer. J. of Math., Vol. 73, 1951, pp. 891-939; Vol. 74, 1952, pp. 127-162). Jónsson also contributed an appendix to Tarski's Ordinal Algebras (1956). 'The axioms for relation algebras can account for the logic of only dyadic (binary, or two-placed) relations, and that only incompletely, whereas modern logic in general deals with polyadic (many-placed) relations. It was to put the latter in mathematical terms that in the late 1940s Tarski introduced the idea of cylindric algebras, so called because the operation of 'cylindrification' (projection on a component) on polyadic reactions corresponds to the logical operation of existential quantification; this approach was developed initially in collaboration with Louise Chin and Frederick B. Thompson and was to become a major subject of research in the Berkeley school. Those efforts would lead two decades later to the first part of an opus, Cylindric Algebras, authored by Tarski together with Leon Henkin and Donald Monk; the second part would not appear until after Tarski's death [in 1985]' (Ibid., p. 192). The 'major exposition of the subject . Tarski participated actively in the writing of all of Part I of Cylindric Algebras; his participation in the project after that was not active, though he was of course kept abreast of it all along the way' (Ibid., pp. 341-42). Jónsson is cited more times in the text than any other author (see pp. 50, 77, 82, 84, 94, 95, 98, 121, 141, 142, 158, 164, 175, 237, 315, 330, 356, 430, 431, 434, 436, 437, 441, 444, 473, 481, 482, 483). Buchnummer des Verkäufers 18471

Titel: Cylindric Algebras. Part I. With an ...

Volume I provides a detailed analysis of cylindric algebras, starting with a formulation of their axioms and a development of their elementary properties, and proceeding to a deeper study of their interrelationships by means of general algebraic notions such as subalgebras, homomorphisms, direct products, free algebras, reducts and relativized algebras.