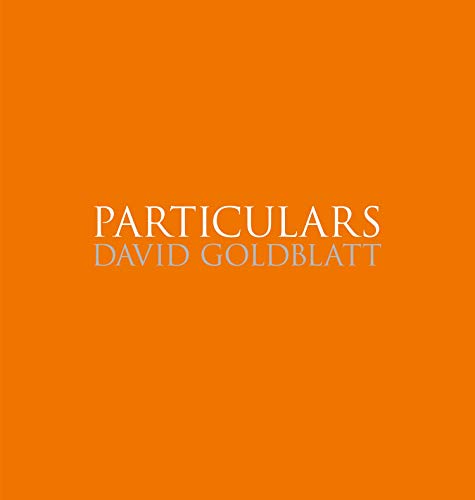 Following a series of portraits of his compatriots made at the beginning of the 1970s, photographer David Goldblatt, for a very short and intense period of time, naturally turned to focusing on peoples' particulars and individual body languages 'as affirmations or embodiments of their selves.' Goldblatt's affinity was no accident: Working at his father's men's outfitting store in the 1950s, his awareness of posture, gesture and proportion-technical as it was-formed early and would accompany him throughout his life. In this series we see hands resting on laps, crossed legs, the curved backs of sleepers on a lawn at midday, their fingers and feet relaxed, pausing from their usual occupations. This deeply contemplative work is framed by Ingrid de Kok's poetry. The photographs in 'Particulars' were taken beginning in 1975, and the first edition of the book was published by Goodman Gallery, Johannesburg, in 2003. Goldblatt has revised 'Particulars' for this new Steidl edition. Buchnummer des Verkõufers 190700

There are some killer photographs in this book. It's somewhat obvious that photography is all about looking carefully, but it's a lot less obvious what this actually means. One of the problems with so much photography produced these days is that it replaces the careful looking with a hyper-caffeinated gawking. Now that's fine for a little entertainment, but just like the caffeine will wear off, so will the pictures (and you're left with, well, not much). Goldblatt is too smart a photographer to allow this to happen.Especially the best photographs in Particulars what can be gained from an attentiveness to the world that knows it needs to balance a desire for the perfect photographic form with the resulting pictures containing more than just that.--J rg Colberg "cphmag.com " I love this series shot by Goldblatt in 1975. First published in book form in 2003, the black and white studies of Goldblatt's contemporaries are all about subtle detail. He describes the nuances of body language and sartorial details as "as affirmations or embodiments of their selves."Goldblatt tells of working in his father's men's outfitters shop in the 1950s as integral in developing awareness of the human form, clothing and ornament. Closely framed, the parallel lines of laddered tights and geometric print of a skirt's surface disappear beneath crossed hands holding cheap handbag. A sprinkle of chest hair mingled with chains and framed by a check shirt, or bare feet with toes bearing corns and sweat seeping though a sleeping man's jacket - all are deliciously observed.--Cheryl Newman "Dirty Books " In 1975, while shooting portraiture during the height of apartheid, the South African photographer David Goldblatt became fascinated by how people composed themselves in front of his camera. "What became apparent to me as I worked," he told me, "was that, in our body language, in our clothing, in our decoration, we often declared our values." For six months, he photographed only the details of people's bodies--the arrangement of their limbs, the placement of their hands, and other minor gestures that he referred to as "particulars."Goldblatt is considered an eminent documentarian of apartheid-era South Africa, but he is emphatic that he did not set out to photograph apartheid directly. He said that this project--which is the subject of his most recent monograph, "Particulars"--was born out of his desire to be more lyrical in his photography. "I was always struck by the need to make photographs that were somehow relevant to our society, to our situation in dealing with apartheid and the opposition to it," he told me. "But I wanted somehow to be free just to photograph the things that I found beautiful."--Genevieve Fussell "The New Yorker "