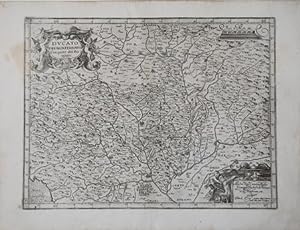 Carta geografica tratta da "L'Italia" a cura di Fabio Magini, edito a Bologna tra il 1620 ed il 1640. la prima stesura della carta del Monferrato del Magini è probabilmente realizzata basandosi su un disegno fornitogli dal Duca di Mantova. Non sono infatti rilevanti le influenze delle carte del Piemonte fino ad allora stampate, dal Gastaldi al Mercator. La successiva revisione, probabilmente nel 1607, viene invece influenzata dalla carta "Disegno Particolare del Piemonte et Monferrato e suoi confini" pubblicata alla fine del cinquecento da Fabrizio Stechi. Questa del Magini è quindi da considerarsi come la prima del solo Monferrato. The first version of this map of the Monferrato region is probably based upon a drawing given to him by the Duke of Mantua since no influence of previous ones, such as those by Gastaldi and Mercator, can be seen. The following version, probably from 1607, instead bears the mark of a map published at the end of the sixteenth century by Fabrizio Stechi which was called "Disegno Particolare del Piemonte et Monferrato e suoi confini". This is the first map dedicated only to the Monferrato region. Engraved by Benjamin Wright. Slightly spoiled at margins, overall in very good conditions. -Italy according to Magini: a cartographical model for posterity- Giovanni Antonio Magini was born in Padua in 1555, dedicating himself to the study of astronomy from an early age. In 1588 the Senate of Bologna appointed him Lecturer of Astronomy at the local university, choosing him instead of Galileo Galilei. His friendship with the Duke of Mantua, Vincenzo Gonzaga, helped Magini in his quest to obtain cartographical material for map-making from the various sovereigns ruling the different italian states at that time. Because of Magini's early death in 1617 this effort was made known by his son Fabio when he published the atlas "L'Italia" in Bologna in 1620. This is the first example of an italian atlas and is made up of 24 pages of descriptive text and 61 maps of the italian peninsula. Although this work was published posthumously, it can be entirely ascribed to Magini. He began drawing this maps around 1594, with the one depicting Bologna and its surrounding territories being the first. They were all printed before 1620 in draft editions which were then revised and updated for the final version. These draft proofs are extremely rare, although sometimes available for sale, and exhibit substantial differences in respect to the maps finally included in the atlas. Two of the most famous engravers of the time, Arnoldo Arnoldi and the englishman Benjamin Wright, were entrusted by Magini to engrave the plates. As we shall see in the presentation of the separate maps, they derive from different sources, both known and unknown, and therefore represent the result of an original work of critical analysis and compilation. This atlas had an important influence on the cartography of the italian peninsula for the following two centuries, beginning from Ortelius and going on to the principal dutch cartographers and editors. From the 1620 edition of "L Italia". Almagià pagg. 25/28. 455 345mm. Buchnummer des Verkäufers IT2253