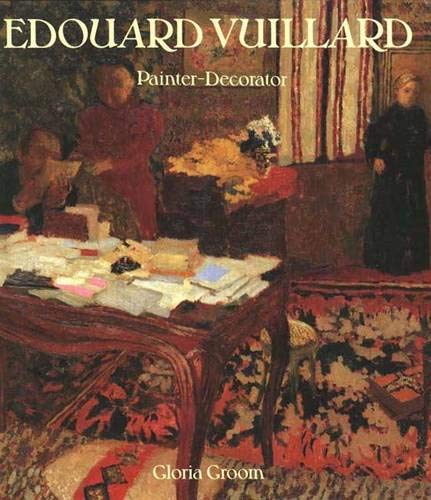 Edouard Vuillard, one of the great post-impressionists, is especially loved for his small easel paintings that capture the charm and mystery of everyday life. Yet at the same time that he was making his name as an 'intimist' artist, he was also creating a number of large-scale canvases, panels, and screens commissioned to decorate the homes of his patrons and friends. Infrequently exhibited, these works were separated from their original settings during Vuillard's lifetime, and they have remained a relatively unknown aspect of his oeuvre. In this lavishly illustrated study of Vuillard as decorator, Gloria Groom examines the two earliest decades of his career, a period when he produced fifty daring and important large-scale paintings as decoration. Groom discusses these early works and recreates and re-evaluates their original context, providing valuable new information about Vuillard's career, a fresh perspective on his thinking about art, and an entertaining social history of fin-de-siecle Paris. She describes not only Vuillard's large decorative projects but also the industrialists, bankers, doctors, financiers, journalists, playwrights, and foreign aristocrats who commissioned them, wealthy individuals who came from a social and economic milieu decidedly different from Vuillard's own. Drawing on his patrons' archives and memoirs, and on interviews with their surviving family members, as well as on Vuillard's own private journals, Groom evokes the circumstances and setting of each of these ambitious projects. She situates Vuillard's decorative works within the evolution of his other easel paintings, discusses the notion of 'decoration' as a new painting style as well as a complementto the aesthetics of the art nouveau movement, and compares Vuillard's works as a painter-decorator to similar projects undertaken by his contemporaries. Very nice clean, tight copy free of any marks. Wrapped in complimentary Brodart dust jacket protector. Buchnummer des Verkäufers 227758

Edouard Vuillard (1868-1940), one of the most admired post-impressionist artists, is best-known for his small easel paintings and their charming portrayals of everyday life. However, a major part of his work during his early life was the painting of large decorative panels in the Parisian homes of wealthy private patrons, produced between 1892 and 1912. These panels - some fifty in total - have been little studied, due principally to the inaccessibility of many of them and the impossibility of their being included in exhibitions. In this book, the author offers an overview of these large-scale projects for decorative commissions, describing how they shaped the artist's thinking about his art and methods of working and the influence they had on his later work. She also discusses the state of private patronage, the nature of Vuillard's patrons, and the understanding of decoration in public and private contexts in turn-of-the-century Paris. The book is lavishly illustrated, showing the panels in their original locations and as they appear today, and also includes other works by the artist and by his contemporaries - Bonnard, Monet and Seurat, amongst others, in order to compare and contrast Vuillard's achievements.