Home Matthew Vickery Employing the Enemy: The Story of Palestinian Labourers on ... 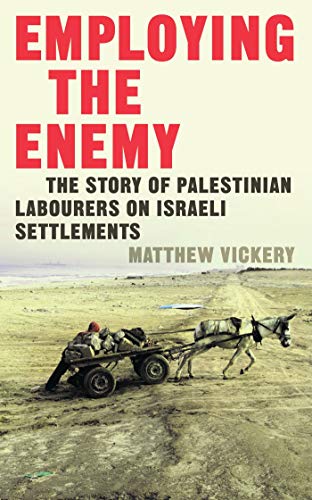 Employing the Enemy: The Story of Palestinian Labourers on Israeli Settlements (Hardback)

Language: English. Brand new Book. Shortlisted for the Palestine Book Awards 2018Thousands of Palestinians, including children, are building and working on illegal Israeli settlements. Their bitter toil entails a daily rejection of their rights and subjects them to dangerous working conditions.Employing the Enemy is a deeply moving narrative that paints a faithful portrait of these workers and their families. Matthew Vickery explores not only the rationale, emotions and consequences of such employment but also why and how people collude with their own oppression. In doing so he draws attention to a previously neglected aspect of the Palestinian experience, exposing these practices as a new, insidious form of state-sponsored forced labour. Buchnummer des Verkäufers BTE9781783609956

Críticas: `Vickery convincingly illuminates a little known aspect of Israel's occupation of the West Bank - the exploitation and abuse of Palestinians so desperate for work that they take underpaid and humiliating jobs in Israeli settlements.' Richard Falk, former UN Special Rapporteur on Palestinian rights `The story of Palestinian workers in Israeli settlements is not well known. This book tells it with candour and vividness. Essential reading for those who want to understand the true extent of Israel's domination of the Palestinians.' Ghada Karmi, author of Return: A Palestinian Memoir `Provides a vivid exposition of the material struggles and moral dilemmas faced by these workers, as well as the ways in which their labour produces its own small, steadfast gestures of resistance.' John Reynolds, author of Empire, Emergency and International Law 'A forensic and humane study of Palestinian workers in Israeli settlements, Vickery's book is a much-needed resource on a complex issue.' Ben White, author of Israeli Apartheid: A Beginner's Guide 'Employing the Enemy provides fascinating insight into issues that are usually only available to the NGO readership ... easy to read, extremely thought provoking and should be read by anyone interested in the structural hardships imposed on the Palestinians living in the West Bank.' Palestine Square 'Vickery writes clearly and movingly about the lives and conflicts of the people that he met ... it draws such a clear and concrete picture of the injustices that are being suffered by the Palestinian workers and of the direct and premeditated role played by the Israeli government in creating this situation.' Jews for Justice for Palestinians

2. Employing the Enemy: The Story of Palestinian Labourers on Israeli Settlements