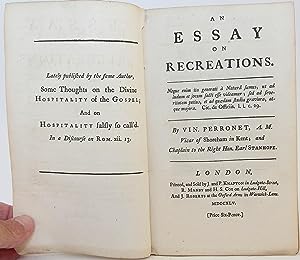 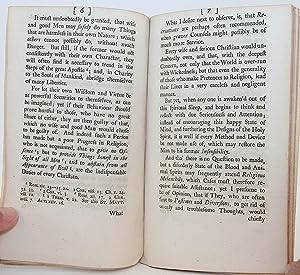 An Essay on Recreations

B00KPYJK3O 1745 'Printed, and Sold by J. and P. Knapton in Ludgate-Street, R. Manby and H. S. Cox on Ludgate-Hill, and J. Roberts at the Oxford Arms in Warwick-Lane' (London), 4 5/8 x 7 1/4 inches tall disbound pamphlet, [2], 27, [1] pp. Minor age-toning and slight creasing to title page and preceding page. Trimming to top edge shaves a few page numbers slightly. Otherwise, apart from a bit of edgewear, a very good copy of a scarce work by an important figure in early Methodism. ESTC records only one copy in North America, at McMasters University Library. Reference: ESTC No. T80741. ~SSS~ Vincent Perronet (1693-1785) was an Anglo-Swiss clergyman of the Church of England, the vicar of Shoreham, Kent and an early Methodist. On February 14, 1744, he had his first interview with John Wesley, who was impressed by his piety. Both the Wesleys visited him and preached in his church in 1746; when Charles Wesley preached there a riot took place, and he was defended by one of Perronet's sons, Charles. The Wesleys looked to Perronet for advice and support: he was a close friend. He attended the Methodist conference of June 15, 1747. A letter from him in February 1751 led John Wesley to decide on marrying. Perronet wrote in defence of the Methodists, and was called "the archbishop of Methodism". He encouraged a Methodist Society at Shoreham, headed by his unmarried daughter Damaris, entertained itinerant preachers, attended their sermons, and had preaching in his kitchen every Friday evening. He held a daily Bible-reading in his house. In 1769 he had a long illness, and, when recovering in January 1770, received visits from John Wesley and from Selina, Countess of Huntingdon. In 1771 he upheld Wesley against the countess and her party at the time of the Bristol conference. Perronet died on May 9, 1785 at the age of 92, and was buried at Shoreham by Charles Wesley, who preached a funeral sermon on the occasion. Buchnummer des Verkäufers SSS-0641-766

1. An essay on recreations. By Vin. Perronet, .

2. An Essay on Recreations. By Vin. Perronet,