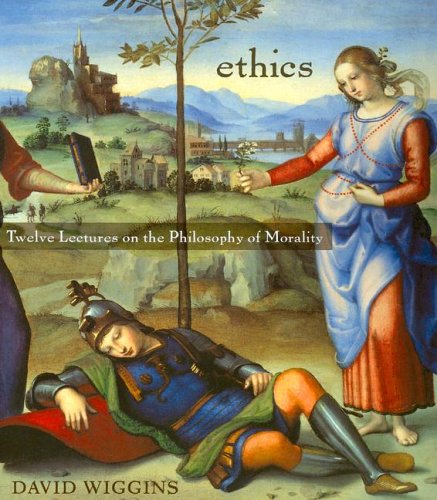 Ethics. Twelve Lectures on the Philosophy of Morality.

First Edition. x, 393 pp. Original cloth. Near Fine, in near fine dust jacket (unclipped). 'Almost every thoughtful person wonders at some time why morality says what it says and how, if at all, it speaks to us. David Wiggins surveys the answers most commonly proposed for such questions--and does so in a way that the thinking reader, increasingly perplexed by the everyday problem of moral philosophy, can follow. His work is thus an introduction to ethics that presupposes nothing more than the reader's willingness to read philosophical proposals closely and literally. Gathering insights from Hume, Kant, the utilitarians, and a twentieth-century assortment of post-utilitarian thinkers, and drawing on sources as diverse as Aristotle, Simone Weil, and Philippa Foot, Wiggins points to the special role of the sentiments of solidarity and reciprocity that human beings will find within themselves. After examining the part such sentiments play in sustaining our ordinary ideas of agency and responsibility, he searches the political sphere for a neo-Aristotelian account of justice that will cohere with such an account of morality. Finally, Wiggins turns to the standing of morality and the question of the objectivity or reality of ethical demands. As the need arises at various points in the book, he pursues a variety of related issues and engages additional thinkers--Plato, C. S. Peirce, Darwin, Schopenhauer, Leibniz, John Rawls, Montaigne and others--always emphasizing the words of the philosophers under discussion, and giving readers the resources to arrive at their own viewpoint of why and how ethics matters' (Harvard University Press Web site). Wiggins retired in 2000 from the Wykeham Chair of Logic at the University of Oxford after 40 years teaching philosophy in the universities of Oxford and London. Buchnummer des Verkäufers 16800

Titel: Ethics. Twelve Lectures on the Philosophy of...