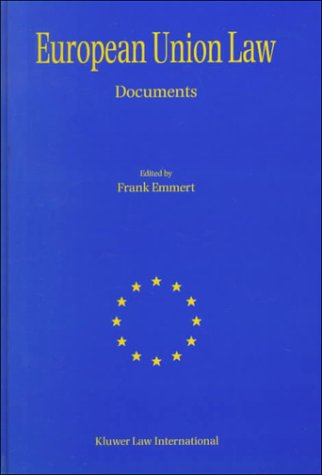 The purpose of the present volume is to provide advanced students of European integration and all those working with European Union law in practice with a compact collection of the most important primary and secondary sources of this law, a quick reference guide, and a desk-copy for rapid and frequent consultation. The collection includes many documents relating to the institutions of the EU and their decision-making processes. Sources of law, such as the Rules of Procedure of Parliament, Council and Commission, are useful not only to the student who is trying to understand the work of these institutions but also to the practitioner who wants to check the formal legality of an act of one of these institutions. Barristers should appreciate the Statutes of the Court of Justice, the Rules of Procedure of both Courts of the EU, as well as additional documents, such as the official advice for lawyers preparing written pleadings for the Court of First Instance, and the Ombudsman Decision. Secondly, all regulations and directives, as well as most other documents, are reproduced with their preambles. In particular the preambles of the secondary sources provide useful information, since it is here that the institutions dispose of their duty of motivating their legislative activity. These passages are thus important for the interpretation of the operative parts of the legal rules. Thirdly, all documents are printed with article headlines. Since Community law is not exactly user-friendly in this respect, most headlines have been added by the editors. Those additions, as well as all other modifications of the official wording of the legal rules, are indicated by [brackets] and intended for the better understanding of the texts. Ease of access to the law is further enhanced in this volume by carefully designed tables of contents, one general and several specific for the longer documents, as well as a professional index to key words and expressions. The documents themselves were generally obtained directly from the institutions in electronic format, namely by downloading from the official web site of the EU, and in one case of the Council of Europe. Where documents have been amended subsequent to their adoption, these amendments have been incorporated into the text. All documents are thus "consolidated". Wherever possible, the law has been updated to 30th June 1999. Subsequent amendments and important new legislation will be incorporated in new editions of this volume.

Better World Books generates funding for literacy charities through the sales of second-hand books. Our current partner charities are READ International,the National Literacy Trust, Room to Read, Scottish Book Trust (Registered Charities no. 1128534, no. 1116260, no.1125803, SC027669), and the National Adult Literacy Agency. Much of our stock is ex-library due to our close relationships with UK libraries. We offer a service that helps them keep their unwanted books out of landfill. All ex-library books will be marked as such in their individual listings. 99% of orders are dispatched within 24 hours and we offer a 100% money back guarantee if you are not completely satisfied.


We offer 100% 'no questions asked' refunds. If you are not satisfied with your
book, just send it back to us and we will refund your purchase in full.

Please do not hesitate to contact us with any questions or concerns. Abebooks
will provide you with our contact information after you place your order. We aim
to respond to all queries as quickly as is humanly possible - and certainly within
48 hours.


All orders are shipped next business day. We use a second-class service for most items and Spring Global Mail for international orders.