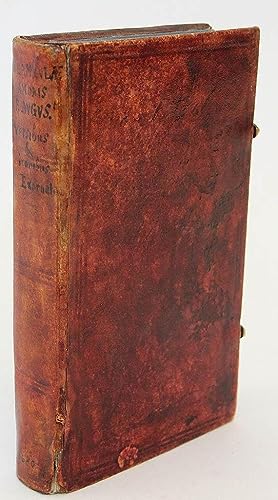 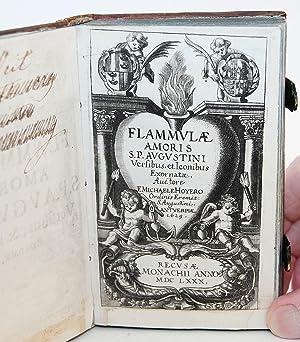 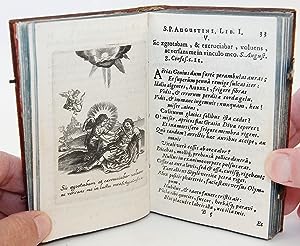 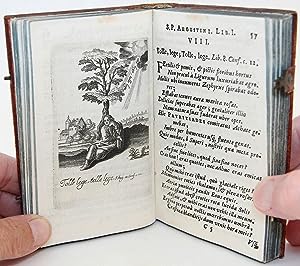 B00KS6LJFQ 1680 second edition of this significant emblem book by Flemish priest and Latin poet Michel Hoyer (1593-1650), s.n. (Munich, Germany), 3 1/8 x 5 1/8 inches tall full blind stamped leather bound, hand lettering to spine, two functioning leather and metal clasps, all page edges green, elaborately engraved title page, 25 full-page engraved emblems, several engraved printer's devices, [4], 199, [9] pp., complete (including blank endpapers). Cracking to bottom and top of front hinge, but all holds, and the binding is quite firm. Contemporaneous ink notations, marked out, to verso of half title. 3/8-inch piece excised from bottom of title page and 1/2-inch square chip from lower tip of the next two leaves (F. Timothy Mayr's dedication) - none impacting text or illustration. Small bit of worming to two blank rear free-endpapers. Otherwise, a very good copy - unusually clean and bright, devoid of marks. A re-issue of the 1629 Antwerp first edition, using the same plates. Uncommon (the substantially different 1708 third edition is much more often seen). In this work, Hoyer, an Augustinian hermit, uses 25 magnificent emblems engraved by Guillaume Collaert, followed by his own extensive Latin poems and a brief selection of commonplaces from Augustine's works, to follow the great saint's remarkable career from sinner to saint. Drawing primarily on the 'Confessions' and a few pseudo-Augustinian texts of a similar slant, Hoyer shows us not only the authoritative Father of the Church, but also the man who struggled with worldly temptations, the adolescent who once prayed to God, 'Give me chastity and continence, but not yet.' (Confessions, 7.7) In both the emblems and Hoyer's text, the affective language of Catholic devotion is very much present: penitent tears, chaste sighs and pious desire. Composed during a tumultuous time for the Church, during the Counter-Reformation, the Flammulae was intended as both motivational - boosting the Catholic faithful, particularly Hoyer's own Augustinian order, following a time of great losses at the hands of their fellow brother Luther - and pedagogical, combining classical allusions and various metrical forms with a distinctly Augustinian morality, for the benefit of students, teachers and preachers. The first portion of the emblems deal with Augustine's long spiritual crisis. In the fifth emblem, for example, Augustine is depicted as a Roman soldier, wounded by one of Cupid's arrows. First aid is delivered by a winged physician (divine love). In emblem 8, his conversion, 'Tolle lege' ('pick up and read,' referring to scripture) comes directly from the heavens, with a Flemish monastery depicted in the background. Evidence of Hoyer's intent to strengthen the identity of his order can be seen in emblem 19, where Augustine is pictured as a Flemish hermit, with the characteristic wide-brimmed hat and black habit. Buchnummer des Verkäufers TTT-0641-776