Verwandte Artikel zu Florentine Magnates, The: Lineage And Faction In A... 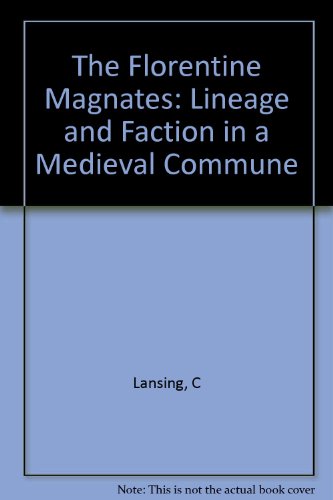 Florentine Magnates, The: Lineage And Faction In A Medieval Commune

Titel: Florentine Magnates, The: Lineage And ...

In the 1290s a new guild-based Florentine government placed a group of noble families under severe legal restraints, on the grounds that they were both the most powerful and the most violent and disruptive element in the city. In this colorful portrayal of civic life in medieval Florence, Carol Lansing explores the patrilineal structure and function of these urban families, known as "magnates." She shows how they emerged as a class defined not by specific economic interests but by a distinctive culture. During the earlier period of weaker civic institutions, these families built their power by sharing among themselves crucial resources--forts, political alliances, ecclesiastical rights. Lansing examines this activity as well as the responses patrilineal strategies drew from women, who were excluded from inheritance and full lineage membership. In looking at the elements of this culture, which emphasized private military force, knighthood, and faction, Lansing argues that the magnates' tendency toward violence derived from a patrician youth culture and from the instability inherent in the exaggerated use of patrilineal ties. In describing the political changes of the 1290s, she shows how some families eventually dropped the most stringent aspects of patrilineage and exerted their influence through institutions and patronage networks.


Customers may use Visa, MasterCard, Discover, or American Express to purchase from Blue Awning Books, or they may send us payment using a check or money order.


Orders usually ship within 1 business day. Shipping costs are based on books weighing 2.2 LB, or 1 KG. If your book order is heavy or oversized, we may contact you to let you know extra shipping is required.