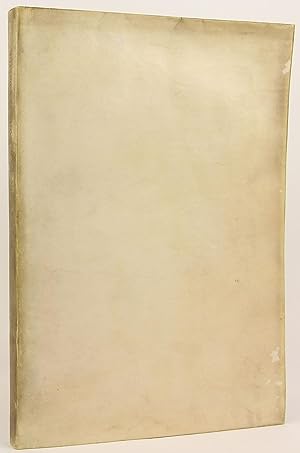 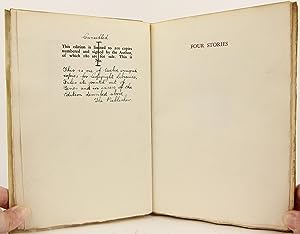 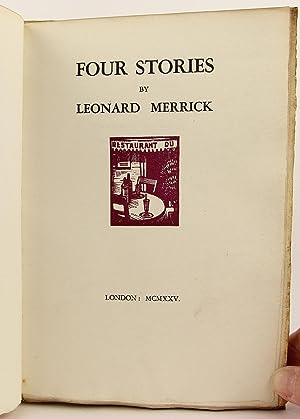 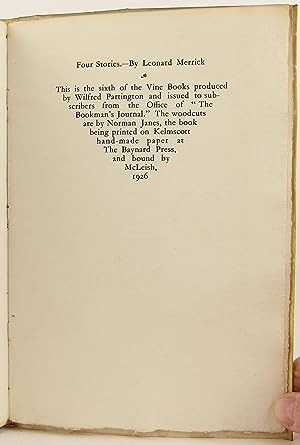 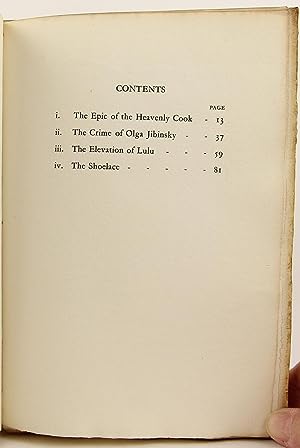 B01EQ3686Q 1926 [from colophon], 'Produced by W. Partington and issued to subscribers from the Office of the Bookman's journal' (London), 6 1/2 x 9 1/2 inches tall vellum-bound, printed on Kelmscott hand-made paper at The Baynard Press and bound by McLeish, color woodcuts by Norman Janes, 101 pp. plus colophon. Not signed by the author - a handwritten statement on the limitations page lines out the limitation notation of only 200 signed copies produced and indicates, 'This is one of twelve unsigned copies for copyright libraries, files, etc., printed out of series and in excess of the edition described above. The Publisher.' Vellum covers are a bit grubby, with minor rubbing to the front cover. An otherwise very good copy - clean, bright and unmarked. ~SP25~ A collection of four stories - The Epic of the Heavenly Cook, The Crime of Olga Jibinsky, The Elevation of Lulu and The Shoelace - produced as a limited edition of 200, hand-printed on Kelmscott hand-made paper bound by McLeish at The Baynard Press. Leonard Merrick (1864 - 1939) was an English novelist. Born of a London family, Merrick at first tried to make a career on the stage. He won attention in 1898 with The Actor-Manager, followed by The Quaint Companions (1903), the story of a black tenor and his white wife; he also wrote Conrad in Quest of his Youth (1903), and The Position of Peggy Harper (1911). He never won popularity, but was highly regarded by his fellow writers, a number of whom, including Wells, Hewlett, Barrie, and Pinero, wrote prefaces to the collected edition of his works, issued in 1918. In 1945 George Orwell wrote an introduction to a never published reprint of Merrick's The Position of Peggy Harper. Merrick still attracts interest because of his willingness to deal with unusual themes, such as the issue of miscegenation in Peggy Harper. Buchnummer des Verkäufers SP25-0461-5760