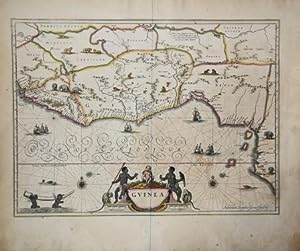 Decorativa carta dell'Africa Occidentale tratta dall'Atlas a cura degli eredi Jannsonius, edito dopo il 1656. Bellissima coloritura coeva, eccelente esemplare. This is a rare and attractive map of West Africa. It depicts the African Gold Coast, Ivory Coast and Slave Coast from Guinea south through the modern nations of Sierra Leone, Mali, Liberia, Burkina Faso, Cote D Ivoire, Ghana, Togo, Nigeria, Cameroon, Equatorial Guinea and Gabon. Extends inland to include the Niger River. The coast is highly detailed. Colourful cartouche on the lower border. Two natives sit at the sides of the title, above which is a scroll with flowers and fruit and, in the center, a very human-looking monkey. Each native holds a string of beads in one hand and, in the other hand, one has a spear and the other one, a parrot. Sitting at each side of the masonry surround is a monkey and on the lower left border are two children carrying a large elephant tusk on their shoulders. The interior contains various animals, rivers, lakes and mountains. five sailing ships are depicted in the seas along the coast line. 530 390mm. Buchnummer des Verkäufers mms1015