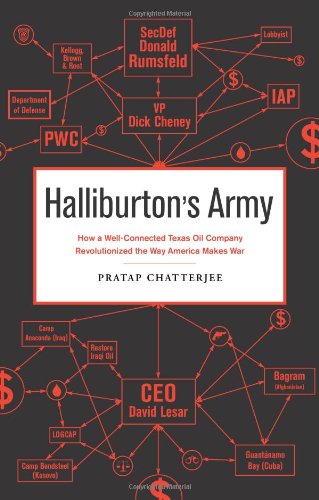 Titel: Halliburton's Army: How a Well-Connected ...

A muckraking investigation of one of the largest oil contractors, "Halliburton's Army" explores the Byzantine nature of Halliburton and shows the extraordinary reach of its many tentacles around the Middle East and around the worldHalliburton has become a synonym for corruption and profiteering thanks to the lucrative, 'no-bid' contracts that this Texas company has won since the invasion of Iraq, thanks to its ties to Vice President Dick Cheney, a former Halliburton CEO. But beyond these highly-publicized acts of corporate malfeasance, a veil of secrecy surrounds Halliburton. "Halliburton's Army" is the first book to show, in shocking detail, how Halliburton really does business, chronicling Halliburton's role from the summer of 2002, in the run-up to the Iraq invasion, over the period of the next six years.Pratap Chatterjee - one of the world's leading authorities on corporate crime, fraud and corruption - shows how Halliburton won and then lost its contracts in Iraq; what Dick Cheney and Donald Rumsfeld did for their business cronies at Halliburton to help them win no-bid contracts in Iraq, and who the company paid off in the U.S. Congress; how the same Pentagon officials who issued Halliburton's no-bid contracts before the war conspired to give the company generous helpings of billions of dollars from Iraq's own oil revenue. We get a vivid, inside look into the Pentagon meetings where actual decisions got made to send Halliburton to Iraq (not to mention Somalia, Yugoslavia, Uzbekistan and Afghanistan, Guantanamo Bay, and most recently New Orleans).