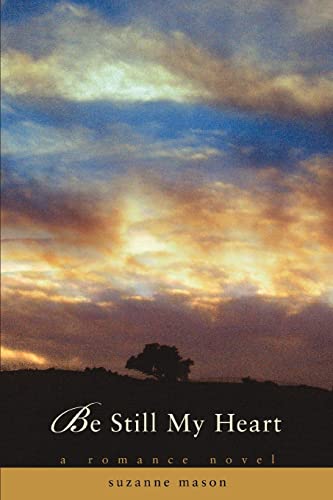 Be Still My Heart; Signed *

B00K: Fine/ $53.45 9780595414604 Be Still My Heart ; Signed * Mason, Suzanne iUniverse 2007 White Portion With Title In Black And Orange, Blue Portion With Title In White Letters Spine, Soft Cover BooK: Fine/As New/, 209 Numbered Pages That Were Probably Not Read, And Are Clean And Tight To The Spine, Slight Shelf Ware, Signed By The Author In The Front Of The BooK, ?Best Wishes Suzanne?, In Blue Ink With No Date. = = Description Applies To This B00K, Only. = This Author Signed Book Has A Special Significance, Is Hard To Find, Will Be Packaged And Shipped = Carefully, To Avoid Shipping Damage And Will Make It, An Excellent Addition To Your Own Personal Library Collection, Or As A Gift, For The Discriminating Reader / Collector. = WORLD WIDE SHIPPING, AVAILABLE. =*=* California State Law Now Requires The Following Notice Be Given: *=*=* Seller Did Not See And Was Not Present When This Item Was Signed. No Certificate Of Authenticity Is Included In This Sale/Purchase Price. If You Would Like A Certificate Of Authenticity, You Can Obtain One At Your Own Convenience And Expense, Which Is Not Included In The Purchase Price Of This Item. =*=*. Buchnummer des Verkäufers 005402

Titel: Be Still My Heart; Signed *

Sydney Parker Ross is as rooted in Texas as the old oak tree outside her bedroom window. Jared Trent, a land developer from Washington DC, is in Texas Hill Country to settle his grandmother's estate. Despite their differences, she and Jared fall in love during riding classes and picnics at the springs. But when Sydney finds out about Jared's plans to rezone his late grandmother's one-thousand-acre ranch into retail shops and residential housing, the two have an argument, with neither of them realizing the ramifications of their harsh words.

To add to Sydney's confusion, her longtime friend Duncan Sinclair proposes, arguing that they were meant to be together. Sydney loves Jared without reservation but doesn't want to hurt Duncan. But she needs to choose quickly before she loses one-or both-of her loves.

When Sydney receives word one fateful morning that Duncan's plane has crashed, she doesn't believe it-just as she doesn't want to believe the last angry words she shared with Jared a few days earlier. Trying to absorb it all, she remembers the summer that brought them to this point.


Terms of Sale
Subject to availability of items and verification by Seller of correct price and condition. Seller may, in his sole discretion, refuse to sell any item to any prospective buyer. Seller shall have the right to determine mode of payment and delivery which is normally by United States Post Office, at the expense of buyer and which requires a street address, not a P.O. Box number. Payment in advance is may be required for first time clients. We accept cash, money order and checks in US...