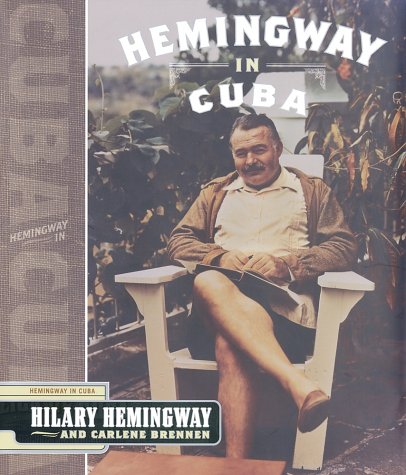 148 page hardcover with many photo illustrations. All about Hemingway's years living in Cuba (1939-1960), Dust jacket is bright, complete and clean. Interior is unmarked, tight and clean. An author signed bookplate of the publisher is laid-in - not yet attached. Size: 9 1/2 x 10 1/2. Buchnummer des Verkäufers 536018

From 1939 to 1960, Ernest Hemingway made Cuba home to his life and work. Upon winning the Nobel Prize, he pronounced himself a "Cubano Sato"—garden variety Cuban—and gave the award to the Cuban people. To this day the Cubans revere "Ernesto," and the country that Hemingway loved remains unchanged in its character and beauty.

Hemingway in Cuba is at once a literary journey for Hemingway aficionados and a rich companion to Papa’s time in Cuba and in neighboring Bimini and Key West. Hilary Hemingway gives new insight into her uncle’s life in Cuba, relating tales of his renowned passion for big game fishing, the women who competed for his affection, and the people who came to inhabit novels such as To Have and Have Not and Islands in the Stream. Readers of Hemingway will recognize Cojimar, the small fishing village featured in his best-known work, The Old Man and the Sea, as one example of how Cuba left an indelible mark on his work.

In the care of Cuban curators since his death in 1961, Hemingway’s home in Cuba holds a trove of letters, books, and other documents vital to Hemingway scholarship. Hemingway in Cuba features revelations from the curators’ ongoing research at Finca Vigía, as well as details of the Hemingway Project, a historical collaborative agreement that allows select American scholars to examine this cache of Hemingway papers for the first time. Accompanied by 160 archival and contemporary photographs, Hemingway in Cuba is a must-have for the Hemingway enthusiast.

A general used bookstore since 1981 with an academic stock of approx.30,000 titles. The stock is primarily non-fiction and is both hardcover and paperback. The store is open to the public by chance or appointment. The titles listed on the internet are separate from the store stock, and represent only a small percentage of total inventory.


Credit Card (MasterCard, Visa, AX, Discover), Check or Moneyorder.
Shipping and handling-- Media rate is $4.00 for first book and $1.75
for each additional book. Priority rate will be quoted upon request. Foreign mailing at cost.


Orders usually ship within 2 business days. Shipping costs are based on books weighing 1.5 LB, or .680 KG. If your book order is heavy or oversized, we may contact you to let you know extra shipping is required.