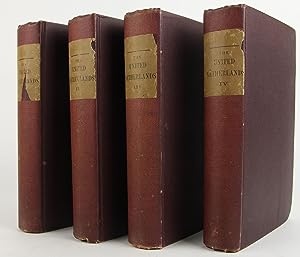 B0046CEJ46 1860-67 Harper and Brothers (NY), four 6 1/4 x 8 7/8 inches tall brown buckram cloth hardbounds, no dust jackets, printed paper labels to spines, top page edges gilt, black endpapers, frontispieces with tissue guards, Volume 1 with folding map, extensively indexed, xii, 532, vii, 563, x, 599, vii, 632 pp. plus 8 pp. of publisher's ads. (2370 pages total) A complete set. Slight to moderate soiling, rubbing and edgewear to covers, with a few bumped tips. Chipping to the paper spine title labels, especially to Volume 1. A couple of pages with slight marginal soiling. Half-inch closed tear to folding map in first volume. Otherwise, apart from slight age toning, a very good set - clean and unmarked - of this important history of the Netherlands, covering the period from 1584 to 1609. Note that this is a heavy and oversized set, so additional postage will be required for international or priority orders. ~EE~ John Lothrop Motley (1814-1877) was an American author, best known for his two popular histories The Rise of the Dutch Republic and this, The United Netherlands. He was also a diplomat, who helped to prevent European intervention on the side of the Confederates in the American Civil War. In 1846, Motley had begun to plan a history of the Netherlands, in particular the period of the United Provinces, and he had already done a large amount of work on this subject when, finding the materials at his disposal in the United States inadequate, he went with his wife and children to Europe in 1851. The next five years were spent at Dresden, Brussels, and The Hague in investigation of the archives, which resulted in 1856 in the publication of The Rise of the Dutch Republic, which became very popular. It speedily passed through many editions and was translated into Dutch, French, German, and Russian. In 1860, Motley published the first two volumes of this, The History of the United Netherlands, a work on a larger scale, embodying the results of a still greater amount of original research. It was brought down to the truce of 1609 by two additional volumes, published in 1867. Buchnummer des Verkäufers EE-0771-7728